A report surfaced today that Apple is testing iOS 7, as well as the iPhone 6. I’m amazed that this made headlines. I’m guessing investors would be jumping ship faster than they already are if Apple wasn’t in the process of testing the next iterations of its products.

We’ve just breached this first week of 2013, and a lot of people are worrying about whether Apple can continue its seemingly impossible growth trajectory. Issues have been reported with its supply chain. Others say the iPhone and iPad are not putting up the numbers they expected, while still others blame the plummeting stock price almost entirely on a single product (maps, iPad mini). 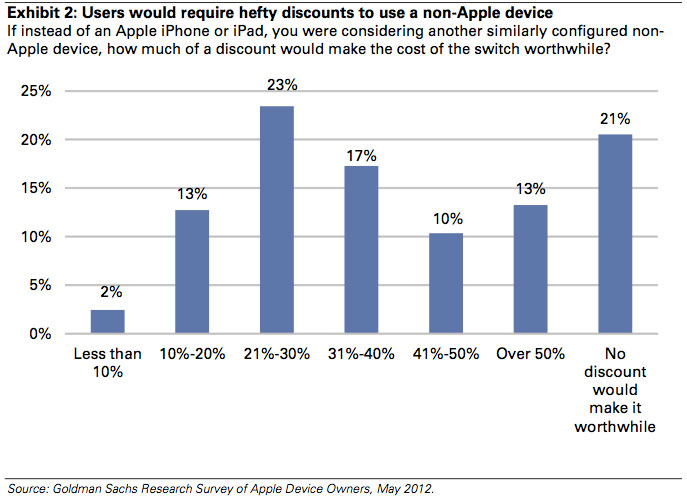 According to Seeking Alpha, the average analyst target is still at $740, or 44 percent above where the stock currently sits at right around the $540 mark. I’m not a financial analyst, and neither do I own or have any interested in Apple’s stock price, so I won’t go there. However, if any sense can be made from the end user’s perspective, which probably has very little with how Apple’s stock performs, I have to say that I don’t think Apple is in all the trouble that we keep seeing in these overblown headlines.

Steve Jobs made products for creative types, people who would use his machines to produce their own content (music, art, graphic design, photography, architecture). Because of that vision, he also gradually ensured that Apple would control that content in a very specific way.

Applications like iTunes, iPhoto, Pages keep the end user’s homegrown, as well as purchased content ensnared in Apple’s proprietary formats and as a result tied to machines that run its operating systems. What does that mean? It means those users will continue to purchase those devices to which their content is tied, namely devices running iOS and OS X. With the advent of iCloud, Apple continues to increase that stickiness.

It’s exactly this stickiness factor that is at the core of Apple’s strength. I don’t think many financial analysts take into account how truly “stuck” many Apple users feel. As an iPhone 5 user, I’m intrigued by a number of Android devices. I liked the Galaxy Note, and a number of other Android devices. I also think Microsoft’s Windows 8 OS has its merits. Still, when I think of jumping ship, I’m immediately reminded of the hassle involved in getting that new mobile device to interact with my Mac at home. And then there’s Apple TV, which I’ve grown to love since cutting cable. And moving all my photos from iPhoto to a Windows machine? Forget about it.

I’ll admit that I have never liked Apple’s iPhoto for the way it aggregates my photos into a single, proprietary library that can only be unpacked by a machine running OS X. And yet I’m willing to tolerate iPhoto for the benefits of using Apple’s honed user interface, slick hardware and excellent selection of apps in the iTunes App Store. But most of all, I’m just incredibly wary of what it would take to exit the Apple ecosystem at this late stage, and I’m not alone.

I’m always open to new technologies. I’m not afraid to switch to something new. Ask my wife, and she would agree, while pointing at the mound of discarded gadgets in our basement. I have a number of gripes with my iPhone 5. The battery life is only mediocre, and I try not to think about the company’s new proprietary lightning connector for how angry it makes me. These aren’t small things and neither are they the only places where Apple has missed. And yet, I am unable to make the move to Android or Windows 8. There are too many ways that Apple and its products have engrained themselves in my life.

So while the news lately might have you thinking that Apple has peaked, remember that Cupertino has a customer base that is perhaps more chained to its products than any other OEM. As a result, with healthy margins maintained, Tim Cook should at the very least be able to plateau at a place far above the rest of the pack.

Well, I’m here to say that he has at least succeeded in making exceptionally sticky products.