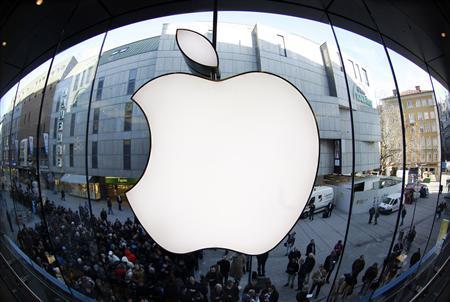 The iPhone revolutionized the smartphone industry, driving Apple’s expansion into Europe and China and, after just half a decade, yields about half its annual $100 billion revenue haul.

But the world’s most valuable technology company — which throughout the global recession near-unfailingly smashed Wall Street forecasts — is beginning to lose its aura of invincibility.

The company has missed Wall Street targets twice in under a year. CEO Tim Cook may now have to worry more about economic and product launch cycles, and the whims of fickle consumers.

Tuesday’s numbers also showed the impact of the economic slowdown in Europe on its sales, something a smaller, less-exposed Apple was able to dodge a few years ago.

“Apple is a little bit more vulnerable,” said Giri Cherukuri, head trader at OakBrook Investments. “There are chinks in their armor now.”

The reason for its vulnerability: its very success and size.

“When they were small enough, they could power through it,” Sterne Agee analyst Shaw Wu said. “Now it’s so pervasive that it’s a lot harder.”

The change in sentiment was evident in Cook’s call with investors on Tuesday following a miss in fiscal third quarter earnings numbers.

Cook assessed how the global economy — particularly in Italy, France, Greece, and China — impacted iPhone sales. This stood in stark contrast to his comments in 2009, when the world’s credit system froze and global economy was grinding to a halt in the aftermath of Lehman Bros’ collapse.

“We just spend our time projecting our business and leave the economy forecasting and comments to economists,” Cook said during an earnings conference call nearly three years ago — before the launch of the iPad and when the Mac computer generated more revenue than the iPhone.

On Tuesday, Cook was somewhat more expansive in his assessment of the business environment.

“We are certainly seeing a slowdown in business in that area,” Cook said of Western Europe. “Fortunately, the U.S. and China, although I realize it’s getting a lot of press, we’re not seeing anything there that we would classify as an obvious economic issue.”

The blockbuster smartphone that adds a special gloss to the Apple brand is a highly cyclical product. Buyers emerge in droves every time a new version is launched, lining up at stores overnight, and snarling supply for the device.

Its popularity has heightened speculation around the device every year as over 100 million yearly customers decide when to switch to a new model, whether to buy now or hold out for a better but same-priced phone.

In fiscal 2009, Apple grew 35 percent despite a global credit crisis that hurt most companies. But Apple generated only $6.75 billion from iPhones that year.

It raked in over $16 billion in iPhone sales last quarter alone, a little under half of total revenue.

“When you become so reliant on a single device then that device’s life cycle is going to have a much bigger impact on the results,” Morningstar analyst Michael Holt said.

Investors had already lowered their expectations, but they did not expect the company to miss altogether. A lot of the blame was placed on the pause prior to the launch of a new iPhone, which some fear is becoming a yearly trend.

“We expect to see greater volatility in Apple’s quarterly results going forward due to the growing importance of the product cycle,” Holt said, adding that more consumers now are tuning into the chatter around expected new products.

That’s prompted Wall Street to take Apple’s notoriously conservative earnings forecast more seriously now. On Wednesday, JPMorgan cut its price target on the stock to $675 from $695, Raymond James slashed it to $730 from $800, and Canaccord Genuity reduced its target slightly to $797. Goldman cut its price target to $790 from $850.

Finally, as consumers await the new iPhone — expected to be a complete redesign with a bigger screen — competition is growing from the likes of Samsung Electronics’ new Galaxy S III.

But analysts and investors say that the choppiness in iPhone sales doesn’t matter as long as Apple’s strong growth resumes during the holiday quarter after the anticipated new iPhone hits the stores. Expectations are high that Apple will launch a phone that will again beat the competition in terms of features.

And the bullish view of Apple’s growth is evident in the stock price, which is up 42 percent for the year despite a 4.3 percent drop on Wednesday on the Nasdaq market.

“This is likely one of the last buying opportunities ahead of the iPhone 5 launch as we expect headwinds to reverse in the calendar fourth quarter,” Morgan Stanley’s Katy Huberty said.