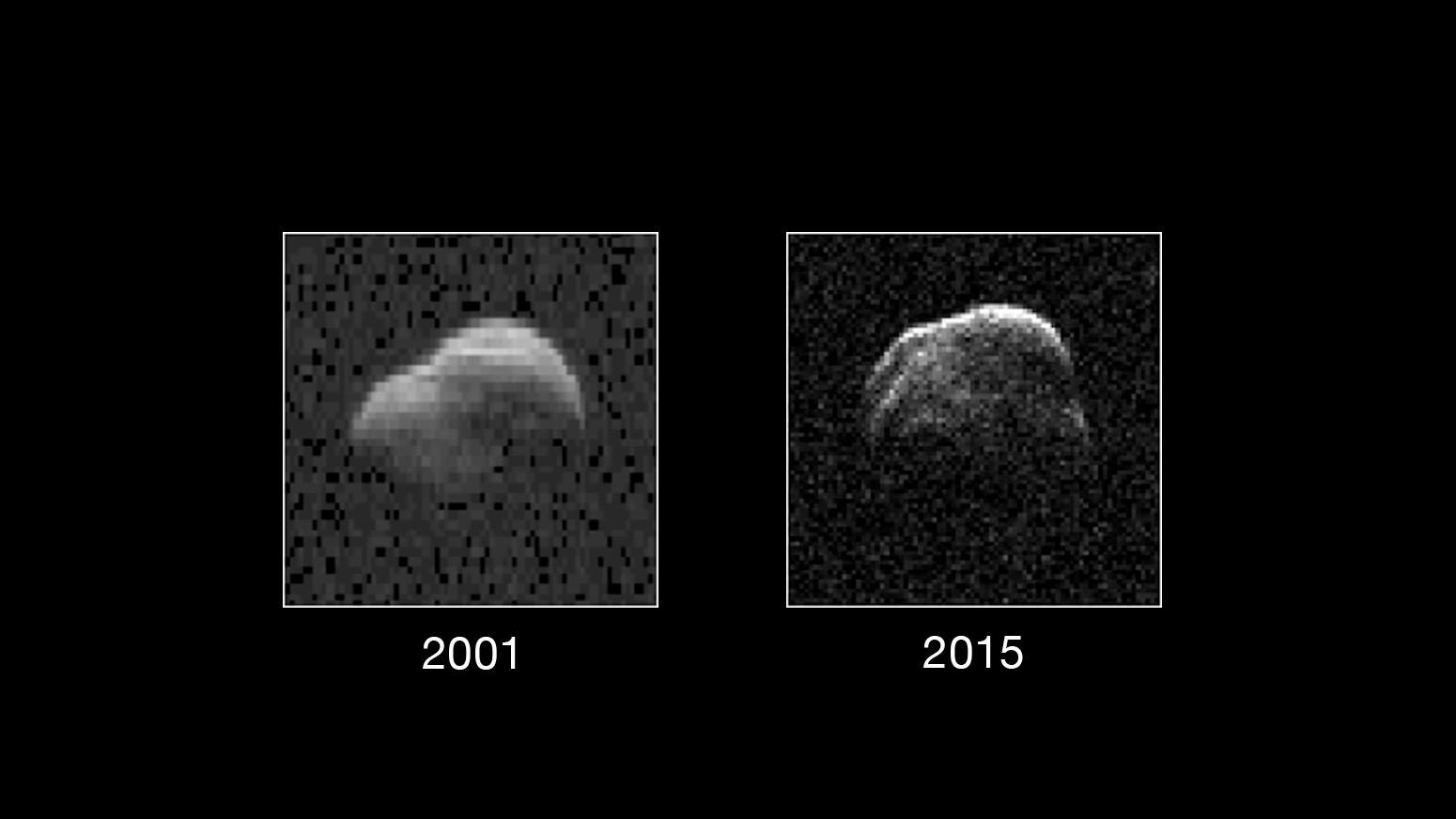 On the left is a radar image of asteroid 1998 WT24 taken in December 2001 by scientists using NASA’s the 230-foot (70-meter) DSS-14 antenna at Goldstone, California. (Image credit:NASA/JPL-Caltech/GSSR/NRAO/AUI/NSF)

Asteroid 1998 WT24 safely flew past Earth on Dec. 11 at a distance of about 2.6 million miles (4.2 million kilometers, 11 lunar distances). During its flyby, NASA scientists used the 230-foot (70-meter) DSS-14 antenna at Goldstone, California, to probe it with microwave transmissions. Using this technique, they created the highest-resolution radar images of the asteroid.

The new radar images achieve a spatial resolution as fine as 25 feet (7.5 meters) per pixel. They were obtained using the same DSS-14 antenna at Goldstone to transmit high-power microwaves toward the asteroid. However, this time, the radar echoes bounced off the asteroid were received by the National Radio Astronomy Observatory’s 100-meter (330-foot) Green Bank Telescope in West Virginia.

“With this upgraded resolution we can see the asteroid’s ridges and concavities in much greater detail,” said Shantanu Naidu, a postdoctoral researcher at NASA’s Jet Propulsion Laboratory in Pasadena, California, who works with the radar team and set up the observing plan for the asteroid’s flyby. “One or two other radar bright features that could be outcrops on the surface are also visible.”

Naidu noted JPL’s asteroid radar team is also preparing to observe asteroid 2003 SD220, which will make its closest approach on Dec. 24 at about 28 lunar distances.

“From optical observations, we know it could be anything between a few hundred meters and a few kilometers wide and that it is on NASA’s list as a potential human-accessible target, said Naidu. “But that is about it. Using radar, we should be able to see the shape of the object. For me, that is what makes this job so exciting. Every time we observe something, we are seeing something nobody has ever seen. We are making an unknown known, and as a scientist what can be better than that?”

NASA places a high priority on tracking asteroids and protecting our home planet from them. In fact, the U.S. has the most robust and productive survey and detection program for discovering near-Earth objects (NEOs). To date, U.S. assets have discovered about 98 percent of known NEOs.

In addition to the resources NASA puts into understanding asteroids, it also partners with other U.S. government agencies, university-based astronomers, and space science institutes across the country, often with grants, interagency transfers and other contracts from NASA, and also with international space agencies and institutions that are working to track and better understand these objects. In addition, NASA values the work of numerous highly skilled amateur astronomers, whose accurate observational data helps improve asteroid orbits after they are found.