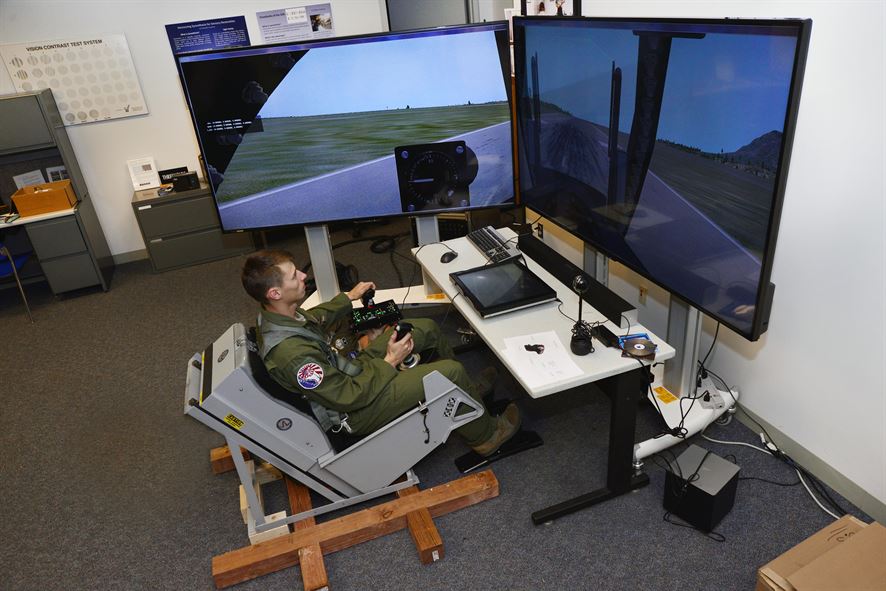 But it’s not just any seat. It’s a dynamic motion seat, a replica of a pilot seat with electric components that allow it to function like an actual crew seat and imitate the motions a pilot may experience in the air.

The seats are the result of a cooperative research and development agreement with ACME-Worldwide Enterprises.

The research project also included a welding class for the cadet researchers.

“It’s our job to build the simulator around the chair,” said Cadet 1st Class Jordan Read, a systems engineering major.

The goal of the cadet researchers is to give pilots a realistic experience inside a simulator, said Ken Levanoski, ACME’s business development manager.

“When something malfunctions, you really don’t want (the pilot) to first feel it in a plane,” he said.

The seat is designed to cue the pilot so they know what is happening to the aircraft, Levanoski said.

The results of the project are scheduled to be published in 2016 and will go to training commands across the Air Force and the Air Force Research Laboratory, said Lt. Col. Christopher McClernon, the research director for the Academy’s Warfighter Effective Research Center.

“From those results, we can hopefully build more efficient training systems that are a better use of our taxpayers’ money and produce better pilots,” he said.

McClernon said the results of the project could also benefit the Academy as cadets who participate in the research project are expected to use the seats prior to the Academy’s Powered Flight Program.

“The powered flight class takes cadets who have no flying experience and gives them 10 lessons (in a simulator),” he said. “What we are trying to prove is that we can train cadets to fly solo after eight lessons instead of 10.”