It seems China is heading a lot of innovative government-backed projects over the last year or so, with an especial focus on radar. Back in 2017, I wrote about China’s claims of developing quantum radar, and it seems they’re getting ready to double down on their arsenal of detection technology. According to various reports, the Chinese government is getting ready to build a radar system capable of emitting beams so powerful, some researchers are worried this device could manipulate the weather. Beijing is reportedly prepared to begin installing this highly secretive machine in the South China Sea.

Described as a high-powered incoherent scatter radar, the system will be located on a resort called Sanya, which is situated on the island province of Hainan. Reported to have a range of 1,200 miles (capable of reaching as far as Singapore), these radar systems have the ability to knock out communications. The radar system has military and civilian applications, and could challenge U.S. dominance in this particular region of the world. The radar will officially be used for studying the high atmosphere. Despite an international agreement in 1976 forbidding such actions, scientists are still concerned these kinds of machines could potentially be used as super-weapons to manipulate the weather and trigger doomsday-type natural disasters. 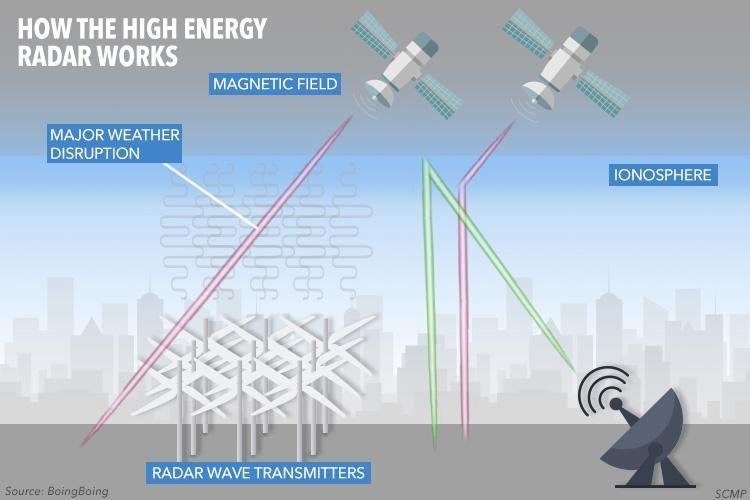 The high-powered incoherent scatter radar system works by generating rapid pulses of electromagnetic energy and beams them into the ionosphere (a layer of atmosphere that can reflect radio waves due to a high concentration of ions and electrons). By analyzing radio waves bouncing back off the particles, researchers can accurately measure disturbances in the ionosphere caused by cosmic activity like the Sun’s rays. This data can be used to correct radar images from spy satellites to gather more information, and focus more precisely on a specific target.

Scientists could also stimulate the lower ionosphere to generate low-frequency waves and send these back to Earth by fine-tuning the high-energy beam. The waves generated by the radar system can travel long distances through seawater and reach submarines in the deep ocean, meaning the technology could be used to send instructions to an underwater craft from the base without the need for them to approach the surface.

In theory (and I can’t stress that part enough), extreme bouts of weather in the form of thunderstorms, hurricanes, tsunamis, and flooding could be triggered if these waves are made powerful enough. Despite concerns from some in the scientific community, most researchers have labeled these warnings as “alarmist,” and question whether or not this radar technology is truly capable of orchestrating such cataclysmic feats.

Nonetheless, the facility would be home to the most powerful radar in the South China Sea and (regardless of its ability to generate extreme climate events) would have multiple military uses primarily pertaining to improving China’s submarine warfare capabilities and disrupting other country’s communication networks by creating an atmospheric “black hole.”

Orders have come from the Chinese government to develop and strategically locate the radar system in the highly contested South China Sea, where Beijing has been building artificial islands jam-packed with military hardware as they look to overtake this nautical region of the Eastern Hemisphere. While Chinese officials declined to comment on the radar system’s possible military uses, one researcher working at the site of the Hainan Project did say the device’s implementation plan has been approved by China’s Central Government.