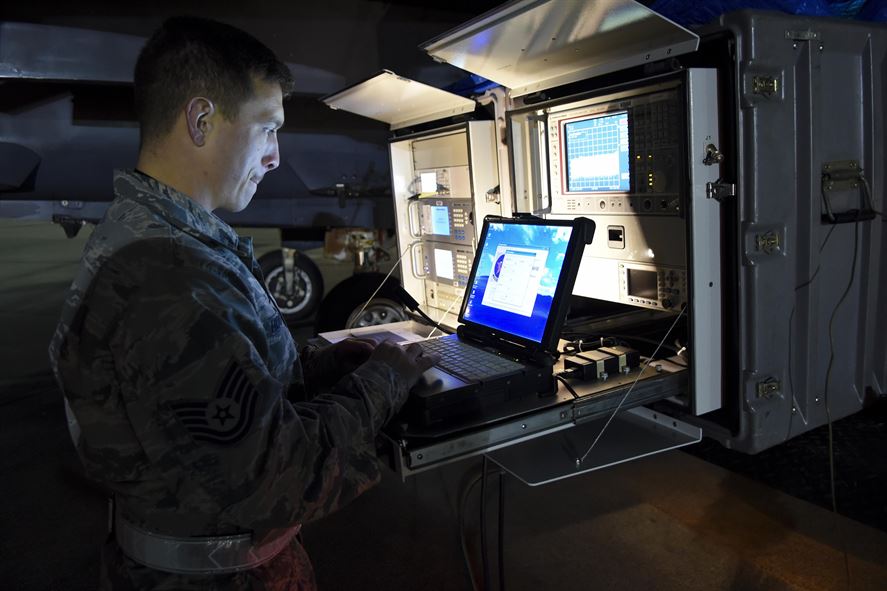 Electronic warfare Airmen tested the radar capabilities of fighter aircraft to see if equipment is battle ready as part of the Combat Shield program from Oct. 19-23.

The Combat Shield mission keeps the unit’s Airmen busy and constantly in transit across the U.S. and overseas to evaluate the Air Force’s fighter aircraft. A Combat Shield team is in some form of travel about 185 days per year, and teams drive about 14,000 miles per year as they evaluate more than 20 Air Force wings.

“The goal of Combat Shield is getting information to higher level decision makers so they can decide what changes need to be made — funding, training, equipment — to ensure that we’re putting the best equipment forward,” said Maj. Kyle Schlewinsky, the 16th EWS assistant director of operations. “Really, the end result is some guy strapping that jet on and flying into combat. We want to give our pilots the greatest odds possible of coming home.”

According to Schlewinsky, Combat Shield is ACC’s answer to this requirement. He also explained the risks facing aircrews may drastically change in the near future, and the airframes must be prepared.

“For the past decade or more, we’ve been focused on Operation Iraqi Freedom and Operation Enduring Freedom, which is uncontested close-air support,” Schlewinsky said. “In uncontested airspace, our aircrews aren’t really worried about radar-guided surface-to-air and air-to-air threats.”

He added the cost for failure is too high to be overlooked and complacency now could cause lives to be lost in any future contested conflict.

To make sure the 4th Fighter Wing’s aircraft are mission ready, regardless of the type of threat, the 10-man Combat Shield maintenance team tested the F-15E Strike Eagles’ ALR-56C Radar Warning Receiver System, the aircraft’s primary threat detection system, by assessing its sensitivity and ability to detect incoming enemy threats.

Using a USM-642 Raven signal generator, members of Combat Shield can quickly and accurately evaluate the effectiveness of the threat detection system.

Schlewinsky said the evaluation was completed around day-to-day operations tempo, and took just four days to test every operational Strike Eagle assigned to the wing.

At the end of the testing, the program evaluators determined the Airmen assigned to the 4th AMXS have worked hard over the last year.

“I’m really proud of the guys here at the 4th AMXS,” said Chief Master Sgt. John Moore, the 4th AMXS superintendent. “The Combat Shield team told us that we were able to make the best improvement they’ve seen across ACC to date.

“At the end of the day, these results improve our confidence in our ability to go downrange.”

Once all the data is compiled, Combat Shield’s findings will be provided to ACC headquarters in a comprehensive report of the major command’s assets.

The 16th EWS and Combat Shield belong to the 53rd Wing headquartered at Seymour Johnson AFB.