Imagine there’s a flock of aerial robots searching for a lost hiker. They have to cover a large area of remote bush and a central commander won’t work because they’re so spread out.

So, instead, the robots work cooperatively to calculate the best way to cover and search this large area accurately and speedily.

This scenario is less Black Mirror than it sounds, and more about focusing on practical solutions for jobs that are difficult for humans to do, says Dr Arlie Chapman from the Melbourne School of Engineering.

Describing the focus of her research in mechatronic engineering, Dr Chapman says “it centres on multi-vehicle robotics, or many robots working together to achieve a common goal”.

Mechatronic engineers explore developments in automation and manufacturing – blending multiple disciplines of engineering. And it can involve creating smart machines that are aware of their surroundings and can make autonomous decisions.

Dr Chapman works specifically in the field of multi-vehicle, or swarm, robotics.

And she’s kicking serious goals in STEM. In 2018, Dr Chapman was the recipient of a L’Oréal and UNESCO For Women in Science fellowship, celebrating the achievements of exceptional women in STEM across various career stages.

Using a combination of mechanical, electrical and software engineering to build the robots, Dr Chapman then programs the vehicles using algorithms to react and think autonomously.

“There are benefits to using many smaller Unmanned Aerial Vehicles (UAVs) in place of one large one, particularly for job like cleaning up an oil spill, environmental monitoring or searching for survivors of a mine collapse,” says Dr Chapman.

Not only is there the element of redundancy with smaller vehicles – losing one small UAV out of a group is less of a problem than losing a single large UAV – but there are also the implementation benefits. For one thing, there’s the improved coverage capability and reduced cost.

“A swarm of cheap small robots, each with little capability, can replace one costly highly-capable robot,” she says.

In Australia, UAVs are now used for agricultural monitoring as well as for surf and rescue in the ocean, which means getting the job done faster which is particularly important for time-sensitive applications.

Currently for rescue operations, a trained lifesaver is needed to fly the UAV. But wouldn’t it be easier if the UAV could work autonomously, which avoids taking the lifesaver away from their area of expertise, while adding another pair of ‘eyes’ watching swimmers in the surf? 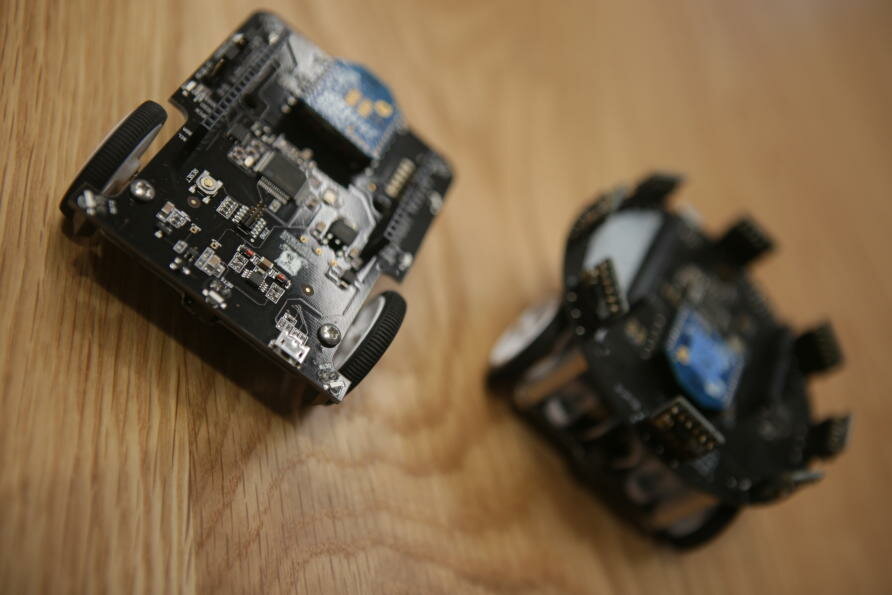 But Australia’s sometimes deadly surf is just one danger that can be monitored by Dr Chapman and her colleague’s research.

“In bush fire-fighting operations, autonomous systems can work in conjunction with humans. A flock of aerial vehicles could support firefighters by providing critical information on the changing fire conditions.

“As firefighters move with the fire front, the flock can move in concert, better positioning themselves to gather and relay more significant information. This is called human-swarm interaction,” says Dr Chapman.

Although it may sound technologically intimidating, Dr Chapman says part of her job is to communicate “easily understood solutions to really complex problems”. And she’s using that skill to drive benefit back into real-world outcomes, in the surf, on the farm and in the wilderness.

The potential for Dr Chapman’s work to impact across multiple industries is also far reaching, including aerospace and defence, critical infrastructure and logistics, agricultural robotics, and even automation in mining. And it goes back to her goal of removing the human element from “dull, dirty and dangerous tasks”.

While her research looks to the future, Dr Chapman’s inspiration also comes from nature.

“I have always been very maths based. The opportunity to watch something perform and dance to your mathematics is very exciting. You can look at fish swarming, or a flock of birds and you can write the same equation for robots,” she says.

“These robots could provide us with reliable data that increases our knowledge of the world. Precision watering of crops, for example, could supply us with more accurate maps of land erosion, crop health and water run-off, while also minimising water usage,” she says.

So, robots and humans working together.

This interconnectivity is something Dr Chapman says is a trend we’ll see increasing in the engineering of the future. Whether that’s using robots to improve the efficiency of coordinated rescues in disaster recovery or improving interconnected transportation networks, the potential for multi-vehicle robotics to help humans is unlimited.

“We hope to one day create a robotic swarm that can perform and dance like a flock of starlings – all through mathematics and engineering.”