Researchers at Tokyo Institute of Technology have found a simple, yet highly versatile way to generate “chaotic signals” with various features. The technique consists of interconnecting three ring oscillators, effectively making them compete against each other, while controlling their respective strengths and their linkages. The resulting device is rather small and efficient, thus suitable for emerging applications such as realizing wireless networks of sensors.

The simple idea underlying the design of the circuit is linking together some ring oscillators having lengths equal to the smallest odd prime numbers, such as 3, 5 and 7 (top). Even a simple sum between sine waves having such periods yields a complicated-looking signal (bottom), but the interactions between real oscillators lead to a much richer scenario. Credit: Ludovico Minati

The ability to recreate the signals found in natural systems, such as those in brains, swarms, and the weather, is useful to understand the underlying principles. These signals can be very complex, as in the extreme case of the so-called chaotic signals. “Chaos” does not mean randomness; it represents a very complicated type of order. Minute changes in the parameters of a chaotic system can result in greatly different behaviors. Chaotic signals are difficult to predict, but they are present in many scenarios.

Unfortunately, the generation of chaotic signals with desired features is a difficult task. Creating them digitally is in some cases too power-intensive, and approaches based on analog circuits are required. Now, researchers in Japan, Italy and Poland propose a new approach for creating integrated circuits that can generate chaotic signals. This research was the result of a collaboration between scientists from Tokyo Institute of Technology (Tokyo Tech), in part funded by the World Research Hub Initiative, the Universities of Catania and Trento, Italy, and the Polish Academy of Sciences in Krakow, Poland. 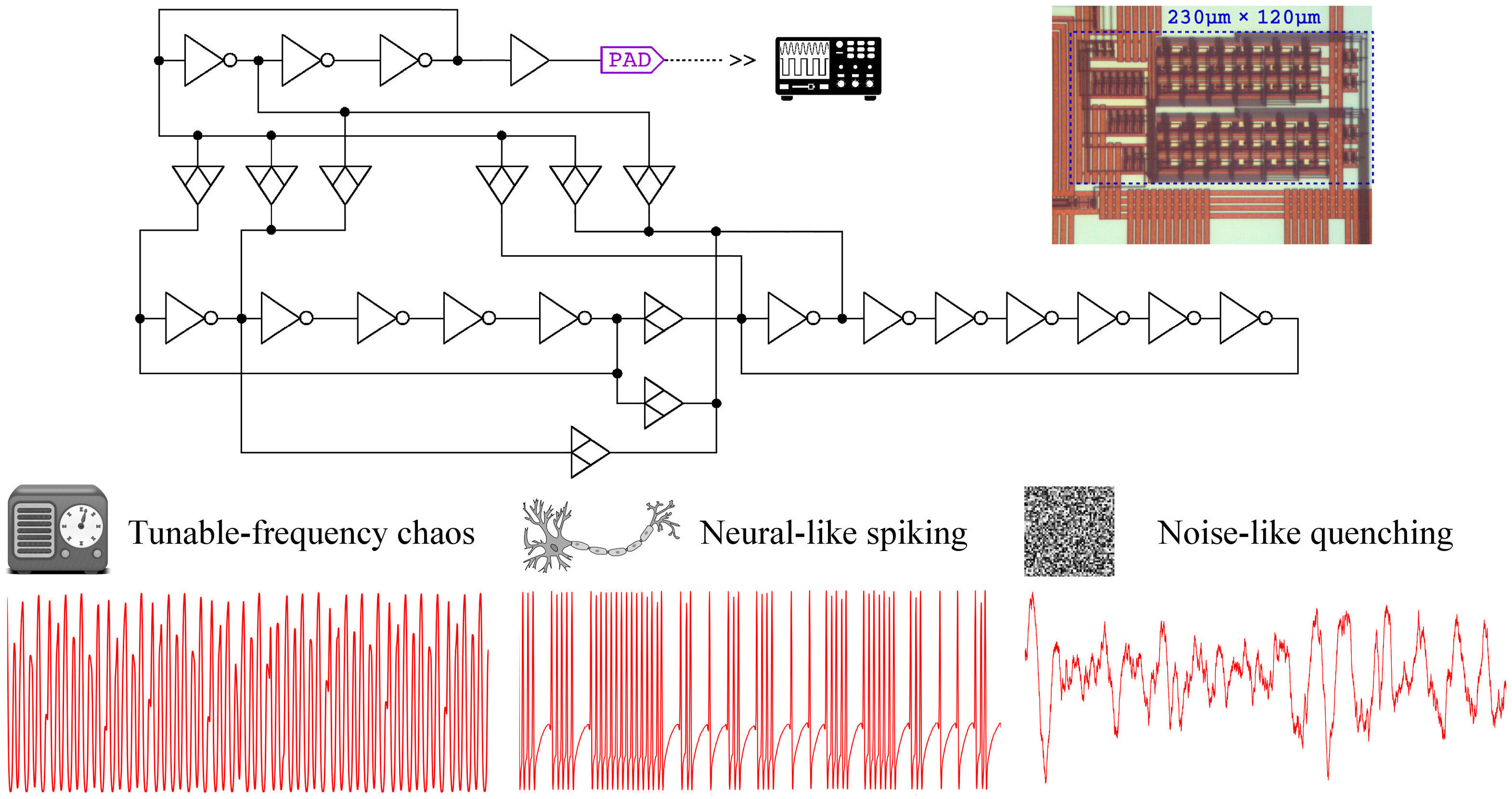 Diagram of the proposed chaotic oscillator circuit, wherein the strengths of the ring oscillators and their linkages are controlled independently, and its prototype layout (top). Examples of three generated signals having rather different qualities: cycle amplitude fluctuations, spike trains, and noise (bottom). Credit: Ludovico Minati

The research team started from the idea that cycles that have periods set by prime numbers cannot develop a fixed phase relationship. Surprisingly, this principle seems to have emerged in the evolution of several species of cicadas, whose life cycles follow prime numbers of years to avoid synchronizing with each other and with predators. For example, attempts to tie together oscillators with periods set to the first three prime numbers (3, 5 and 7) results in signals that are very complicated, and chaos can be readily generated (Fig. 1).

The design started from the most traditional oscillator found in integrated circuits, the ring oscillator, which is small and does not require reactive components (capacitors and inductors). Such a circuit was modified so that the strengths of ring oscillators having three, five and seven stages could be controlled independently, along with the tightness of their linkages. The device could generate chaotic signals over a wide frequency spectrum, from audible frequencies to the radio band (1 kHz to 10 MHz). “Moreover, it could do so at a rather low power consumption, below one-millionth of a watt,” explains Dr. Hiroyuki Ito, head of the laboratory where the prototype was designed.

Even more remarkable was the discovery that totally different types of signals could be generated depending on the slightly different characteristics the individual prototypes (Fig. 2). For example, the researchers recorded trains of spikes quite similar to those found in biological neurons. They also found situations in which the rings “fought each other” to the point of almost completely suppressing their activity: This phenomenon is called “oscillation death.”

The integrated circuit was designed as a tiny “cell” about 200-100 μm large (left), and its first prototype was accommodated on a test board providing all necessary support functions (right). Credit: Hiroyuki Ito and Ludovico Minati

“This circuit draws its beauty from a really essential shape and principle, and simplicity is key to realizing large systems operating collectively in a harmonious manner, especially when it enriched by small differences and imperfections, such as those found in the realized circuits,” says Dr. Ludovico Minati, lead author of the study.

The finding has many possible applications. The researchers will work on integrating this circuit with sensors to measure chemical properties in the soil, for example. Additionally, they will create networks of these oscillators on single computer chips interconnected to resemble biological neural circuits. They hope to realize certain operations while consuming many times less power than a traditional computer.