Sensors and probes both play important roles in a data acquisition system, with each one providing specific information for analysis. Where probes convert signal and change impedance levels or offer convenient connection methods, sensors or transducers convert physical phenomena to electrical signals. Common examples include current probes, accelerometers and photomultipliers.

There are different requirements and technical aspects to consider when selecting the proper probes and sensors to use in conjunction with a digitizer system. Voltage and impedance across the components along with the system all need to be taking into account.

First, let’s look at how the probes work and affect the measurement. Then we can examine some sensor technologies used within high speed digitizers for test and readings.

Most passive oscilloscope probes will work with a digitizer’s inputs. However, you need to be aware of how they’ll affect the circuit being probed and how to scale the data to take the probe into account. By way of example, let’s consider what happens if you connect the 1 MΩ input of a Spectrum Instrumentation M2i.4912-exp digitizer to the measurement point using a coaxial cable, as shown in Figure 1.

The 10 MS/s 16-bit digitizer has an input capacitance of 35 pF, while the coaxial cable has a capacitance in the range of 10-30 pF per foot. This means the total capacitance might be about 95 pF.

Next, calculate the capacitive reactive (Xc) for a 95 pF capacitance at 10 MHz:

At 10M Hz, 95 pF, the impedance is 168 Ω, which could significantly attenuate the voltage being measured. Simply using a shielded cable to connect the digitizer to the device being measured actually loads down the circuit with this capacitance.

High impedance passive probes use a capacitively-compensated voltage divider that separates the amplitude by a factor of typically ten to one (10:1). Such a compensated divider would result in a minimum input capacitance of 10 pF, with times ten attenuation, increasing the probe loading resistance by approximately 10x, as shown in Figure 2.

Input capacitance could be further reduced by increasing the probe attenuation, but would reduce the signal coming into the digitizer, making it more difficult to measure smaller signals. In practice, 10:1 attenuation generally represents a good compromise between signal amplitude and loading impedance.

The probe also attenuates the input voltage level by a factor of 10, something that needs to be accounted for in the digitizer output (as noted later).

High-frequency measurements require probes with very low-input capacitance. The input capacitance can be drastically reduced by considering the coaxial cable as a transmission line.

If the digitizer input is terminated in 50 Ω, the impedance looking into the probe end of the cable is a constant 50 Ω, independent of frequency. This very low-loading impedance can be increased using a voltage divider. A 450 Ω series resistor will divide the amplitude by ten times and result in a relatively constant loading impedance of 500 Ω. A low-capacitance or transmission line probe (shown in Figure 3) utilizes a terminated transmission line.

The input capacitance of a transmission line probe such as this is quite low, and typically about a small fraction of a pF. The limiting factor with this probe is the low-input resistance. For a 10X probe, the input resistance is only 500 Ω and may load circuits too heavily. These probes are typically used in high-frequency designs where the circuits normally run on 50 Ω traces.

An active probe uses a compensated voltage divider driving an amplifier. The buffered output of the amplifier drives a coaxial cable terminated in its characteristic impedance, just as was done in the transmission line probe. Here, it also isolates the probe from the capacitive loading of the cable and input circuitry of the digitizer. These probes are normally powered and controlled by an oscilloscope. To use these probes with a digitizer, the probe manufacturer needs to offer a stand-alone power supply and if necessary, a control interface.

High impedance passive probes are available in several attenuation factors, with 10:1 and 100:1 being fairly common. When added to the digitizer’s 1 MΩ input termination, they offer 10 MΩ or 100 MΩ input resistance. Digitizers with 14 to 16-bit resolution such as Spectrum’s M4x.44xx series (Figure 4), are well-matched to the 100:1 probes because they have sufficient dynamic range to show small signals after probe attenuation. 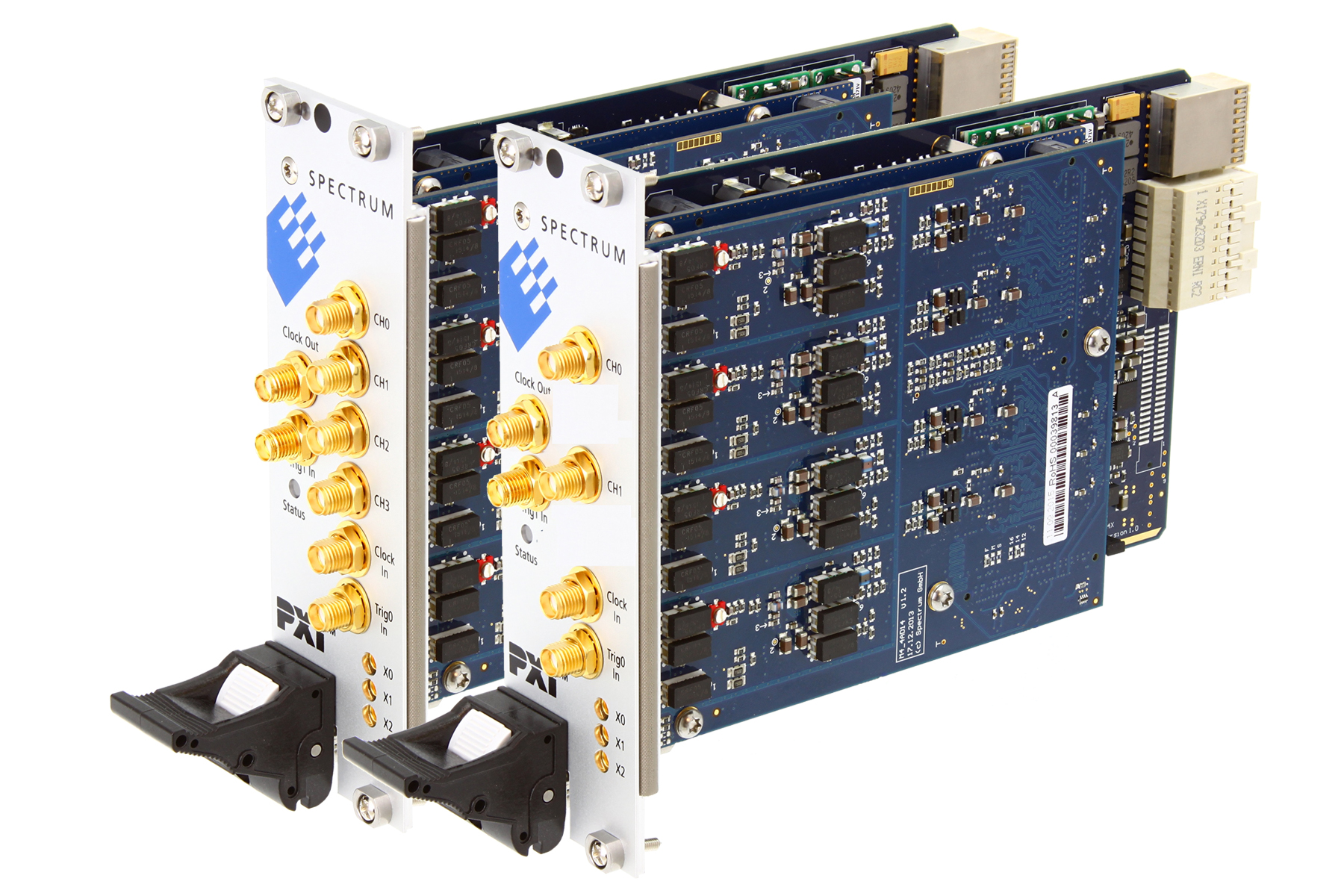 Most high-impedance passive probes use BNC-type connectors. If the digitizer has BNC inputs that’s great, but BNC connectors need a lot of space and digitizer front panels are often very small. You may need to use an adapter.

For example, if the digitizer uses SMA connectors, then an SMA-to-BNC adapter is required to mate with the probe. Transmission line probes work into the digitizers 50 Ω input termination and because these probes generally support bandwidths into the GHz range, they usually use SMA connectors.

A variety of sensor and transducer technologies are used in conjunction with digitizers. Most require a power source, which is typically supplied externally to the digitizer and provided by the transducer supplier, along with related interface electronics.

Piezo-electric transducers are a family of transducers based on an electrical voltage, generated by compressing a crystal or ceramic element. Accelerometers place a known mass in contact with the piezo-electric element and the force on the element is proportional to the acceleration.

A force or load cell measures force by applying it directly to the transducer element. The pressure uses a diaphragm in contact with the element, where the applied force is proportional to pressure on the diaphragm.

Matching a sensor or transducer to a digitizer requires knowledge of many sensor parameters including output range and impedance, bandwidth, sensitivity, and their interactions with the digitizer. The sensor output range, for example, must be within the voltage range of the digitizer, or it may require attenuators or amplifiers to bring it into the digitizer’s range.

Most sensors are designed to work in a fixed impedance. Digitizers, like other measuring instruments, generally offer input terminations of 1 MΩ or 50 Ω, and most broad band transducers are designed to match 50 Ω load impedance. Lower bandwidth sensors may require a 1 MΩ load. Further, some specialized transducers may be designed to work in other impedances such as 75 Ω or 600 Ω. In these cases, matching pads in addition to making adjustments to the sensor sensitivity may be required.

The bandwidth of the digitizer should be significantly greater than that of the sensor to avoid reducing the effective bandwidth of a system. A digitizer-to-sensor bandwidth ratio greater than 7:1 will result in less than 1% uncertainty in amplitude measurements, which is an acceptable accuracy for most applications. For higher amplitude measurement accuracy, the digitizer-to-sensor bandwidth ratio needs to be increased.

Sensitivity is the ratio of the given value of the sensors electrical output to the equivalent measured property. For instance, an accelerometer’s sensitivity may be specified as 10 mV/g. This means that for a measured physical input of 1 g, the transducer outputs a 10 mV signal. Knowledge of this sensitivity characteristic is important when calibrating the digitizer to read in measured, rather than electrical units.

With appropriate scaling, oscilloscope probes and other sensors can be used with any modular digitizer, and data can be read in the desired custom physical units. It’s important to note the specific attributes of the probes and sensors in relation to the digitizer system in which they will be incorporated.

As data acquisition increases in speed and accuracy, properly aligned system components will be even more critical to ensure reliable data transmission.