In the late 1950s, a scientist named Lewis Kaplan divined a new and groundbreaking way to calculate temperature in the atmosphere for weather forecasting: by measuring the vibration of molecules at different altitudes. The hope was to do this using a brand-new technology, an Earth-observing satellite.

At the time, the only way to get a reading on atmospheric temperature was to dispatch high-altitude weather balloons, or radiosondes. Weather balloons collected critical information for weather forecasting. They still do today. But they required a lot of manpower; someone needed to fill each balloon with helium and release it, and they were sparse over the ocean. Hours often passed between measurements.

“Once you got out over the oceans, where there aren’t people to launch balloons, you were essentially in the dark, and weather forecasts weren’t very good,” said William Smith, professor emeritus at the University of Wisconsin, Madison, a distinguished professor at Hampton University in Hampton, Virginia, and a longtime leader in the field. “The satellite data was urgently needed to fill the gap over the oceans, and to fill in some of the time gaps.”

Kaplan, who worked at NASA’s Goddard Space Flight Center in Greenbelt, Maryland and Jet Propulsion Lab in California, as well as the Massachusetts Institute of Technology, before he died in 1999, published his early ideas in a landmark 1959 paper entitled, “Inference of Atmospheric Structure from Remote Radiation Measurements.” It transformed the field of weather forecasting, and arguably, the world.

Fast forward 60 years, and the ideas that Kaplan laid out in that paper remain at the heart of atmospheric sounding, the process by which instruments called sounders probe the sky vertically for details on temperature, moisture and water vapor, revealing subtle changes in the Earth’s atmosphere. NASA and NOAA have led the way in developing the technology for the sounders.

Weather satellites now take hundreds of thousands of soundings a day. They play a vital role in early storm warnings. The data they gather are used for wildly diverse applications, from forecasting snowfall in New Jersey and sea ice in Alaska to tracking toxic ammonia hotspots in California’s San Joaquin Valley. Unlike the radiosondes, they reveal the full scope of the planet.

“You’ve got one instrument that measures everywhere on the globe, every day, for many years, and we calibrate it very, very well,” said Chris Barnet, a senior research scientist for Science and Technology Corporation, who serves as the sounder discipline lead for NASA’s Suomi-NPP satellite and a senior advisor for atmospheric sounding for the NASA/NOAA Joint Polar Satellite System.

On March 26, Barnet delivered a presentation at the JPSS headquarters in which he laid out the history of sounders and the scientists who helped create them.

There was Rudy Hanel of NASA’s Goddard Space Flight Center, who in the early 1980s used a TI-59 calculator to compute how light interacts with Saturn’s ring particles and atmospheric gases, avoiding the crowded keypunch machine and card readers at the computer center. There was David Staelin of MIT, who’d become annoyed with people interrupting him, so he gave his talks in reverse, conclusion first. And David Wark of NOAA’s National Environmental Satellite, Data, and Information Service, known for his gruff, no-nonsense style and perpetual cigar.

“Is it real data?” Wark once asked a young Barnet during a presentation on simulated moisture and temperature results. “Come back when you have some real data.”

“I was new to the community, a newbie, and he just blasted me,” Barnet recalls now. “It was a wake-up call. He was saying, ‘It’s not as simple as you think.’”

And it wasn’t simple. Kaplan had concluded his seminal paper by noting that two factors would be key to making his idea work: “Our technical ability to produce an adequate optical system,” he wrote, “and our knowledge of the atmospheric infrared spectrum.”

By “adequate optical system,” he meant the pointing and detector technology that could take the precise measurements needed to track temperature and moisture in the atmosphere. The second factor, knowledge of the atmospheric infrared spectrum, gets squarely at how satellites measure the weather. 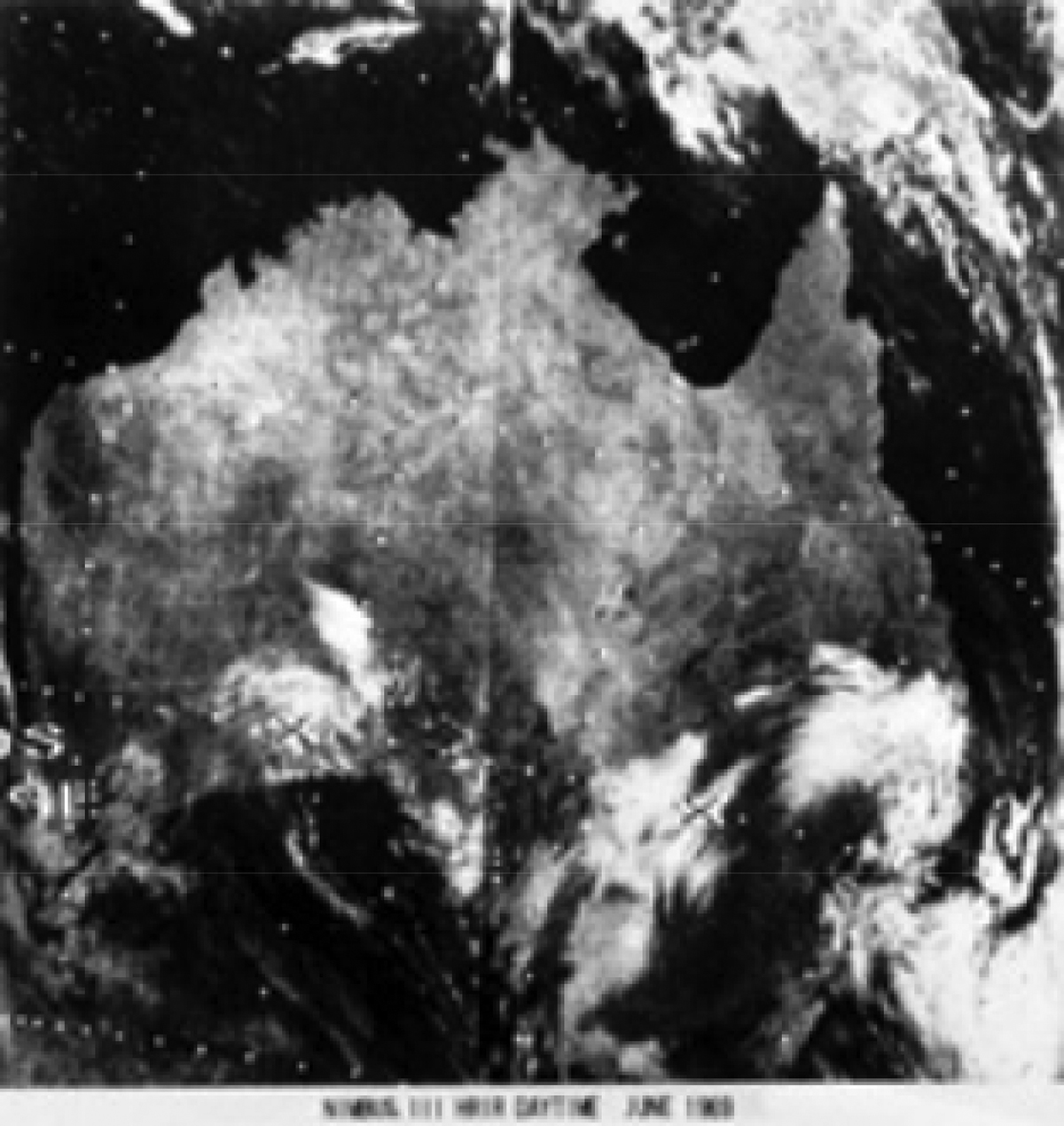 Everything that has a temperature radiates. We radiate. Snow cones and swimming pools and pine trees radiate. So do the molecules of all the gases that make up the atmosphere. If scientists know where in the electromagnetic spectrum to look, they can measure the radiation of different molecules at different altitudes: water, carbon dioxide and ozone, for example. With a knowledge of how these different molecules vibrate or rotate, which has been determined in the lab, plus the use of modern infrared and microwave instruments to secure these measurements, scientists can provide temperature, along with moisture, or gas composition, at those altitudes.

Kaplan had tapped into the idea that temperature, simply, is a measure of the kinetic motion of molecules. Infrared sounders, which “see” in the infrared part of the electromagnetic spectrum, are highly sensitive to the vibration and rotation of certain molecules as they absorb and emit radiation, which means that temperature can be determined by recording that kinetic motion with great precision. The only problem is infrared sounders cannot see through thick clouds.

“When we combine the infrared and microwave instruments, we get a more complete story,” Barnet said.  “The sum is greater than the parts. The two instruments complement each other such that we gain insight to clouds, surfaces, temperature from the surface all the way to the mesosphere, and water vapor in the troposphere.”

The first satellite to take soundings of the Earth from orbit was Nimbus-3, which launched on April 14, 1969, carrying two spectrometers: the Satellite Infrared Spectrometer (SIRS) and the Infrared Interferometer spectrometer (IRIS), developed by NASA Goddard’s Rudy Hanel. This was known at the time as “the Kaplan experiment.” On launch day, Smith and his colleague, Harold Woolf, stayed up all night processing and hand-plotting a day’s worth of global data and delivered their analysis the following morning to the National Meteorological Center.

“Oh my god, this is incredible,” Smith recalls the head of operations saying, when he looked at the data.

That same morning, in a blow to the airlines, weather forecasts had missed strong headwinds in the Western Pacific. It was the kind of miscalculation that could result in travel delays, added expense to the airlines, and even force planes flying from U.S. to Tokyo to stop and refuel. A meteorologist can determine the direction and intensity of wind by looking at temperature patterns. And temperature data from the brand-new satellite clearly showed the jetstream that forecasts had missed.

In his seminal paper, Kaplan had predicted that “Earth satellites hold the promise of continuous and truly global sounding of the atmosphere.” Sixty years later, they’ve achieved just that.

Over the years, atmospheric soundings have become increasingly more sensitive and precise at measuring wavelengths. In the mid-1980s, scientists developed a new way of seeing the Earth from space called “hyperspectral sounding.”  Spectral resolution refers to the ability of a satellite instrument to distinguish features at various wavelengths with high precision. The spectral resolution of the newer operational weather instruments was orders of magnitude higher.

While the Nimbus-3 SIRS instrument, for example, had eight spectral channels for sounding the atmosphere, the Atmospheric Infrared Sounder (AIRS), a hyperspectral instrument that launched in May 2002, has 2,378 channels in the infrared range.  The Suomi-NPP and NOAA-20 satellites, which orbit the Earth from pole to pole, each crossing the equator 14 times a day, have two advanced hyperspectral sounders on board: the Cross-Track Infrared Sounder (CrIS), which has 2,211 channels, and the Advanced Technology Microwave Sounder (ATMS), which has 22 channels.

“This led to a dramatic improvement in weather forecasting,” Smith said in a presentation delivered for the Nimbus 50th Anniversary Celebration in 2014. “The microwave sounding systems and the hyperspectral infrared are the biggest contributors to the weather forecasts now, much greater than the radiosonde. In other words, the forecast accuracy degrades the most if you exclude these instruments.”