Fifth-generation (5G) mobile is venturing where no cellular technology has gone before—the centimeter and millimeter wave bands (3 GHz to 300 GHz). And for good reason—there’s virtually no room left in cellular’s traditional sub-3 GHz bands to add enough capacity to shoulder all the additional traffic that 5G technology will enable.

WiFi is just as congested. That’s why in 2014, the FCC relaxed its rules for the 5 GHz band, effectively giving some WiFi devices access to another 100 MHz of spectrum. But with 4G and 5G cellular both offloading some of their traffic to WiFi, that extra 100 MHz won’t go far.

Hence the need for a new, fundamentally different air interface, one that combines traditional radio frequency (RF) technology with visible light. Called Internet of Radio-Light (IoRL), this technology aggregates 5G Component Carriers in the unlicensed 60 GHz millimeter wave (mmWave) band and visible light communications (VLC) in the electromagnetic (EM) spectrum between 400 and 800 THz.  However, WiGig IEEE 802.11ad could equally well be used for the air interfaces with some slight modifications to the system architecture protocols.

These are the same places where cellular and WiFi will always struggle to keep up. For example, cement boards and the wire mesh in stucco are great for attenuating signals. Some building owners try to get around that problem by installing Long Term Evolution (LTE) Home eNodeB (HeNBs) to create a private, local-area cellular network. But that infrastructure is expensive, and getting mobile operators’ approval to use their scarce spectrum can take months.

Broadband Coverage as Ubiquitous as Light

IoRL avoids these limitations partly by leveraging the trend toward LED lighting in offices, apartment complexes and other commercial buildings. IoRL uses Remote Radio Light Heads (RRLH), which can be integrated with conventional LED lighting systems. So, during remodels and new construction, the IoRL network installation simply becomes part of the lighting installation rather than an extra step with additional expenses for labor and materials

IoRL also leverages lighting’s ubiquity since the dawn of civilisation. Unlike WiFi access points and HeNBs, lighting fixtures are in every part of a building—even stairwells, restrooms, parking garages, and elevators. That means IoRL automatically has coverage in all of those places.

The RRLH uses 5G’s multi-component carrier feature to aggregate the VLC and mmWave bands to provide more throughput than each technology could provide by itself. Figure 1 provides an overview of the RRLH and other components in an IoRL network. It also shows that mobile operators could use IoRL to offload some of their traffic by enabling interworking with their gNodeBs or to simply act as a 5G Radio Access Network direct interface to the Internet in the Home.

Figure 1. Overview of RRLH and other components in an IoRL network.

The access layer has six RRLH controllers, each of which drives up to eight VLC and mmWave RRLH pairs. This architecture enables multiple-input, single-output (MISO) transmission on downlink paths, and single-input, multiple-output (MISO) on uplink paths. The downlink uses MISO diversity to improve reliability by leveraging multipath. For example, if a person accidently blocks one of the mmWave signal path, it’s likely that another mmWave signal and/or a VLC signal will be able to reach the user device. SIMO diversity is used on the uplink and benefits from the same man-made multipath environment in the reciprocal direction.

If all of the signal paths are blocked, IoRL still can maintain a connection by using Multi-Source Streaming (MSS) and Multi-Path TCP. This approach ensures that there’s another low-frequency, low-capacity WLAN path for continued communications and synchronization.

This approach is ideal for mission-critical applications. For instance, it ensures a reliable connection for surveillance cameras in airports and parking garages, where people and vehicles block signal paths.

Locate Devices and People with Accuracy as High as 10 cm

IoRL is particularly useful for location-based applications in environments where traditional RF technologies struggle or are unacceptable. Two examples are hospitals and oil/gas facilities, which often restrict the use of cellular, WiFi, and other wireless technologies for safety reasons. These facilities often have architectural features such as steel and lead shielding that block signals.

IoRL sidesteps those challenges by using both visible light and mmWave signals to locate a device, including ones worn by a person, such as a patient or employee. As Figure 3 illustrates, the LEDs transmit light reference signals on specific sub-carriers that are received by sensors such as photodiodes, which are inexpensive to source and install because they’re based on existing illumination technologies, and use the Received Signal Strength at the photo diode receiver to estimate distance travelled. If this process is repeated by three or more RRLH LEDs, then the position of the User Equipment can be estimated by triangulation. If the environment permits the use of RF, too, the addition of mmWave-enabled location technology can pinpoint a device in an area smaller than 10 cm, which is significantly more granular than alternatives such as cellular. Sounding Reference Signals (SRSs) are sent by all user equipment in the room coverage area on specific 5G Subcarriers to specific mmWave RRLHs and the Time Difference of Arrivals measured and used to estimate distance travelled.  If this process is repeated for three of more mmWave RRLH then the position of the User Equipment can also be estimated by triangulation. 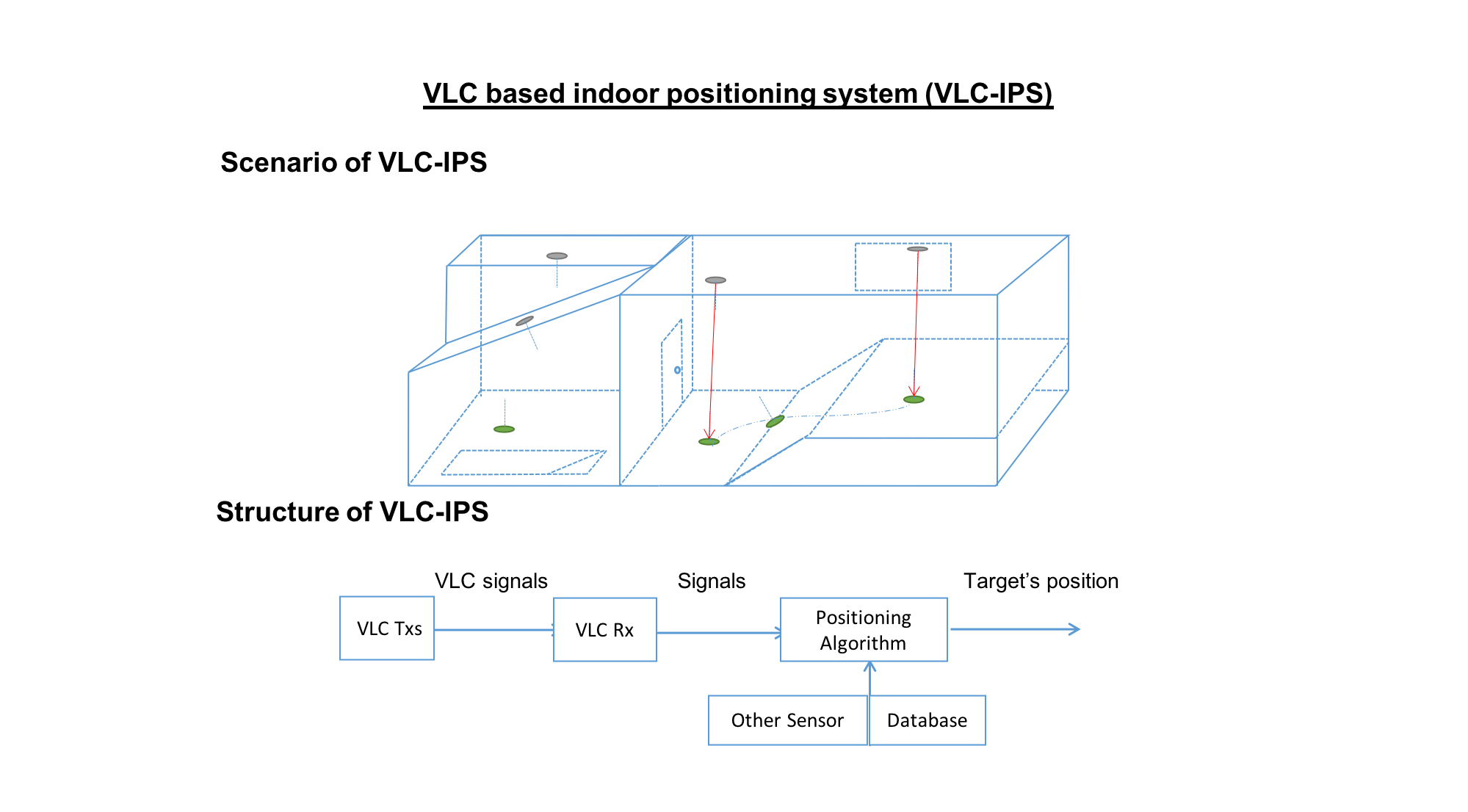 These and other capabilities make IoRL an ideal, much-needed alternative to traditional wired and wireless technologies for providing fast, low-latency, secure, reliable, and seamless broadband in buildings and enclosed spaces such as aircraft, trains, and road vehicles. In the process, IoRL is uniquely positioned to meet the insatiable demand among consumers and businesses for ubiquitous indoor connectivity.