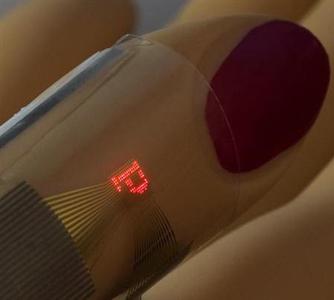 U.S. researchers said on Thursday they have found a way to make large-scale flexible display screens that can be stretched to fit the contours of a bus yet are transparent enough so riders can see out windows.

Click the image to view the slideshow. The thin, light screens might be used to make brake light indicators that follow the contours of a car, or health monitors or imaging devices that wrap around a patient like a blanket, said John Rogers of the University of Illinois at Urbana-Champaign, whose study appears in the journal Science. He said the large display screens combine the scale and durability of light-emitting diodes, or LED technology, used to make flat, lighted billboards, with the flexibility of screens made using organic — carbon-containing — materials. “If you look at these giant billboard displays along the road side, those are made out of inorganic light emitting diodes (LEDs). Our feeling is those systems are quite impressive,” Rogers said in a telephone interview. “The question became is it possible to take that technology and use it in a non-billboard format.” Rogers said current technology using inorganic materials produces chunky individual LED lights that need to be arranged piecemeal with a robotic arm. Screens made using organic materials can be sprayed or painted onto a film surface, but they are not as bright or durable, he said. To solve this challenge, researchers built their LEDs on a thin layer of film later dissolved by a chemical and then affixed tiny plastic tabs on two corners to ensure the LEDs did not wash away in the chemical bath. The team used a special stamping technology to deposit and assemble the inorganic LEDs onto glass, plastic or rubber surfaces. The system works much like a rubber stamp and ink pad, using the LEDs as ink. “The new approach can lift large numbers of small, thin LEDs from the wafer in one step, and then print them onto a substrate in another step,” Rogers said. The LEDs can be interconnected and wired with a conventional process used to wire computer chips, he added. And because LEDs can be placed far apart and still provide enough light, the panels and displays can be nearly transparent. “We can put them on a strip of plastic and make brake lights,” said Rogers, who noted that the project was initially funded in part by Ford Motor Co, which was looking for a way to make brake lights that can follow the contour of a car. The National Science Foundation and the U.S. Department of Energy also funded the project.