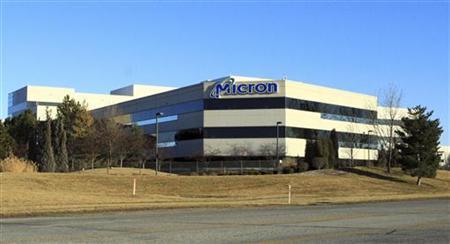 Micron shares rose 5 percent in premarket trading after news of the deal, which will give it chip manufacturing assets at a heavily discounted price and boost its cashflow.

Buying Elpida doubles Micron’s share in the market for DRAM chips, widely used in personal computers, putting it in a stronger position to keep up with industry leader Samsung.

Elpida, an Apple Inc supplier, makes chips used in smartphones and tablets as well as computers.

“We’ve always had deep requirements for additional capacity and this puts us in great shape to respond to that,” Micron President Mark Adams told Reuters in a telephone interview. “This is a big step in providing some stability to our industry.”

Along with the cash payment, Micron will also pay creditors of Elpida about $1.75 billion in annual installments through 2019 and will pay $334 million for a 24 percent stake in Taiwan-based Rexchip Electronics from Powerchip Technology.

Elpida owns about 65 percent of Rexchip, which owns a DRAM factory in Taiwan and an assembly and test facility in Akita, Japan.

Adams said building the equivalent capacity would cost the company about three times as much as it is paying for Elpida.

Micron said the acquisition would boost its earnings within 12 months.

Elpida, has been looking for an investor to sponsor its restructuring after tough market conditions and global competition drove it to file for bankruptcy protection in February with 448 billion yen ($5.6 billion) in liabilities.

It was Japan’s largest bankruptcy of a manufacturer.

A growing preference for tablets has dampened demand for memory chips used in PCs, and growing costs to implement new technology have added to pressure faced by dynamic random-access memory (DRAM) makers.

The future annual payments by Micron will be paid from cash flow generated by the company’s payment for foundry services provided by Elpida, the companies said.

Micron had been in exclusive talks for several weeks to buy Elpida.

U.S. private equity firm TPG Capital and China’s Hony Capital made a joint offer for Elpida in a final round of bidding in early May, while South Korea’s SK Hynix, the world’s No. 2 global DRAM maker, dropped out of the bidding.

Elpida had a 13.1 percent share of the global market for DRAM chips, while Micron had an 11.6 percent share, according to market research firm IHS iSuppli. Combining the companies would take their share of the market above SK Hynix’s 23 percent. Market leader Samsung has about a 42.2 percent market share.

Yukio Sakamoto, co-trustee of Elpida, said in the statement that Micron’s sponsorship would allow for the stable payment of creditor claims and was “a strong testament to the value of Elpida’s technologies, products and people.”

The deals need the approval of Elpida’s creditors, the Tokyo District Court and other antitrust agencies.