NeXtRAD is a dual-band, dual-polarization, multistatic radar system under development at the University of Cape Town (UCT) in collaboration with University College London (UCL). The primary mission of the system is to collect multistatic data of small radar cross-section maritime targets embedded in sea clutter.

NeXtRAD is a multi-sensor network comprised of three stations (or nodes) separated by several hundred meters, all focusing on a common target area. The system requires a usable bandwidth of 50 MHz to achieve a range resolution of three meters. Each node has dual-polarized L- and X-band antennas (IEEE definition) with a 10-degree beamwidth.

This arrangement effectively forms a pair of bistatic radars in combination with a monostatic radar, which means that target data can be simultaneously acquired from three perspectives. This topology has advantages over single-sensor radars. NeXtRAD is a more capable version of NetRAD, a single-frequency multistatic radar developed by UCT and UCL.

Initial Testing and Results: NeXtRAD requires that waveform generation and digitization be fully coherent at each node. To achieve coherency, each node is supplied a very stable 10 MHz reference signal from a local GPS-disciplined oscillator (GPSDO), which is distributed via a frequency distribution unit (FDU) to the Cobalt module and to the receiver exciter (REX). This ensures that there is no phase drift between oscillators in a given node and that the relative phase of oscillators between any two nodes is constant.

The controller software for the Cobalt module was developed using Pentek’s ReadyFlow® software libraries, in conjunction with an arbitrary waveform generator, spectrum analyzer and an oscilloscope. The digitization and waveform generation chains were developed and tested in separate controller programs before fusing these programs into a working source. A simple IF loop-back test, using one of the D/A output channels and a signal splitter, was used for development of digital transceiver before introducing the REX and other subsystems.

The hardware testing configuration, including a frequency distribution unit (FDU), the timing control unit (TCU), the Cobalt module and the receiver exciter (REX), was used to test a low-power bench-top prototype of the active node, using an AWG to supply a rising-edge trigger to the Cobalt module, and signal generators to supply synchronized reference signals to the REX and the Cobalt module.

Using this system, it was possible to detect moving targets by their Doppler shift at close range, such as a moving human target at approximately 75 meters from the transmitter, using a 500 nanosecond pulse with 50 MHz of bandwidth. 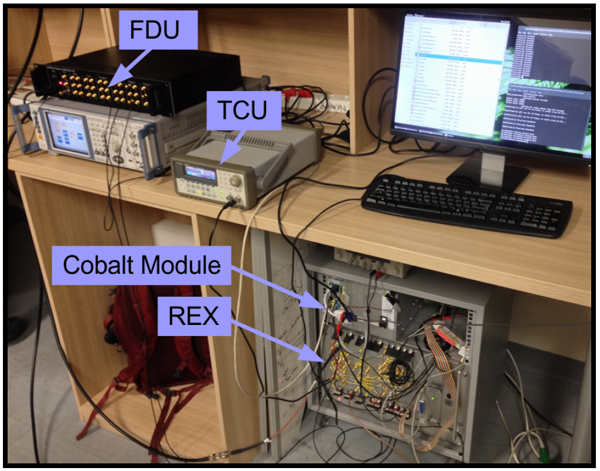