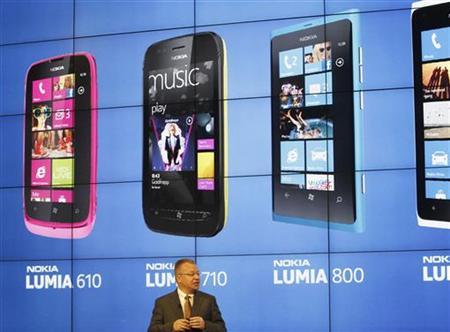 Nokia will start to sell smartphones using Microsoft software in China from April, seeking to claw back market share gobbled up by Apple Inc and Samsung Electronics Co.

China has become one of the hottest markets for smartphone makers, with Apple Chief Executive Tim Cook in Beijing this week for talks with government officials amid problems ranging from labor issues to a contested iPad trademark.

Nokia’s push in China will be an important test for the Windows Phone, which has so far had limited success in Europe and the United States. The world’s largest cellphone maker by volume is reliant on Windows after dumping its own software platforms last year.

The Lumia 800C will be sold without a carrier contract for 3,599 yuan ($573) from April. Pricing for the cheaper 610C model, to launch in China in the second quarter, will be announced later.

The two models will use CDMA technology of China Telecom, the nation’s third-largest carrier. Nokia plans to bring all four Windows Phone models to the Chinese market in the second quarter and also adopt China Unicom’s wireless technology.

Nokia Windows Phones will eventually run on all three of China’s mobile networks including China Mobile, said Colin Giles, Nokia’s global sales chief, although he declined to elaborate on timing.

“We’ve invested heavily in China,” Giles told reporters. “We’re creating innovation in China for China, which a number of our competitors aren’t doing.”

Shares in Nokia rose 3 percent to 4.116 euros, helped also after Sweden’s Swedbank lifted its rating to “buy” from “neutral”.

“This is an encouraging step into the burgeoning China market,” said Geoff Blaber, analyst at CCS Insight in London.

Nokia has lost its No. 1 position in the Chinese mobile handset market to Samsung, with Samsung at 24.3 percent and Nokia 19.6 percent in the fourth quarter of last year, according to market researcher Gartner.

China’s Huawei Technologies and ZTE stood at 12.6 percent and 11.1 percent, respectively, with Apple at 7.5 percent.

“Nokia and Microsoft’s biggest challenge this year will be getting heard above the noise of Apple’s iPhone, which has also launched recently on the same China Telecom network for the first time,” said Neil Mawston of researcher Strategy Analytics.

From 2010 to 2011, Nokia saw its share of the Chinese market shrinking to 30 percent from 70 percent, according to Strategy Analytics.

Microsoft has the backing of Nokia for its Windows Phones, but is struggling to get equal support from other handset makers such as Samsung, which are focused on their Android offerings.