A recent report by ABI put 802.11ac shipments making up two-fifths (39 percent) of Wi-Fi chipsets last year. This, according to the analyst, represents “steadily gained momentum” and this is set to accelerate further in 2016 with 802.11ac Wave 2 products hitting the market, along with tri-band access points. As ABI’s Sam Rosen says: “[they] forecast Wave 2 access points to spearhead 802.11ac shipments, with those shipments representing nearly 65 percent of total Wi-Fi access points in 2016.”

Up until now, each Wi-Fi has essentially usurped the last, so 802.11ac was faster, had a better range and suffered less interference than its predecessors (802.11n, g, b and a), but importantly it was also backwards compatible so you didn’t need to replace every bit of kit in your house every time you replaced a phone or a router.

This model is changing and there are set to be three (possibly four) very distinct flavours of Wi-Fi that each serves a very separate purpose. Here we look at each of these, the specifications, and how they fit into the Wi-Fi ecosystem.

Figure 1: The Wi-Fi ecosystem is undergoing change — adding to the general data transmission channel that uses 2.4 and 5 GHz bands to stream web to devices across the home with WiGig, a multi gigabit standard on the 60 GHz band, and 802.11ah HaLow/ 802.11af, which use 900 MHz / TV white space to broadcast over very long distances.

802.11ac is the latest in the series of general networking standards from the Wi-Fi alliance, an update to Wi-Fi classic, if you will, that delivers a theoretical maximum of 1.3 Gbps. In independent real world tests this has shown typical speeds to be around 250 to 300 Mbps for SISO configurations as typically seen on smartphone implementations, but this is still a lot faster, roughly 2.5X in fact than the previous generation, 802.11n, which had a 450 Mbps theoretical maximum and a real world speed of c.50 to 150 Mbps.

Speed is one thing, but range and interference is what really sells the technology—Wi-Fi (since 802.11b) has used the license free ISM 2.4 GHz band—shared by Bluetooth, shared by ZigBee, and also used by microwave ovens. Now, 802.11ac completes the move 802.11n started, and uses the faster, quieter, less-interference-prone 5 GHz band.

And while broadcasts at 2.4 GHz will, under lab conditions, go further, the interference in this band typically means this isn’t the case in the real world—especially when compared with 802.11ac coupled with beamforming, which is a core part of its specifications.

The standard will eventually be usurped by the 5 GHz 802.11ax technology, which is being developed by a working group led by the Wi-Fi Alliance and Huawei.

This should add OFDMA (orthogonal frequency-division multiple access) and have a more flexible use of spectrum, implement self-optimizing networks, and could add a low-power wake up radio for IoT applications.

WiGig (aka 802.11ad) joined the Wi-Fi Alliance at the start of 2013, stable in a merger of the two bodies. WiGig is the first of the specific use standards of Wi-Fi and was developed to enable very high speed data transfers by using the license free 60 GHz band, particularly video transfer, for example for 4K video from a server (or a mobile device) to the TV (and vice versa) and also for mobile backhaul applications.

The precise specification of this band varies from country to country, but it typically affords 7 GHz but ranges from 5 to 9 GHz, with the US, Canada and Korea all running it between 57 and 64 GHz, Japan similarly delivers 7 GHz of bandwidth, but uses 59 to 66 GHz. China uses a 5 GHz band from 59 to 64 GHz. And the EU delivers 9 GHz of bandwidth, from 57 to 66 GHz.

As such its transmission speeds are very high, with a 60 GB 4K UHD movie transferring in 2.3 minutes (Strategy Analytic tests), and a typical 5 GB HD movie in 12.1 seconds. 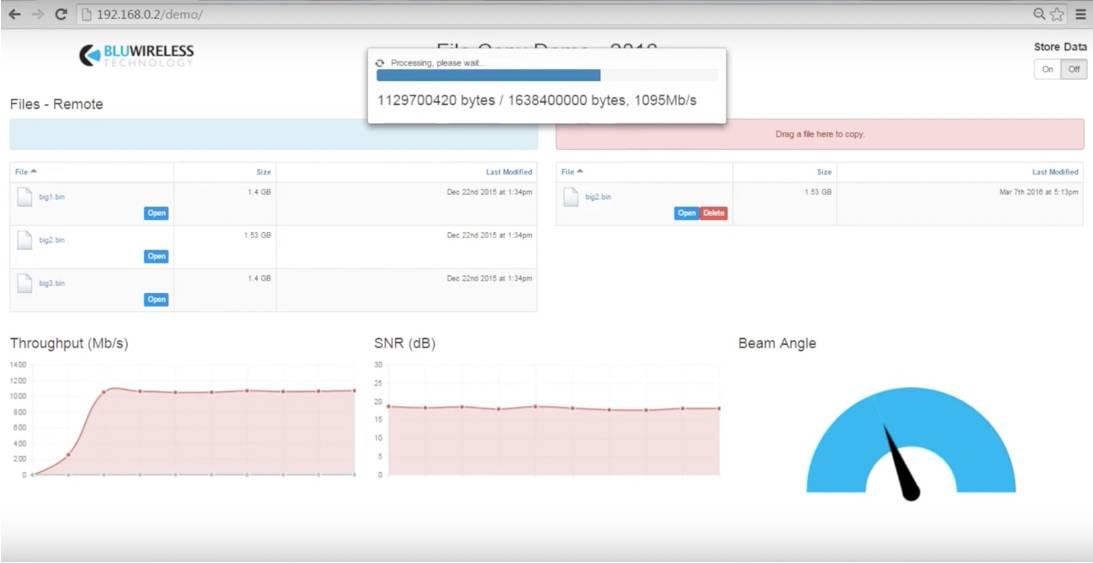 Its range is relatively short and generally line of sight operation over 2 to 10 m for indoor applications and with limited ability to penetrate walls. However, this is acceptable for targeted consumer applications such as HD / 4 K streaming video from the device to the TV (or from a rental kiosk to the mobile device), and also enabling very fast content transfer and/or sync between devices.

One of the biggest challenges in implementing WiGig has been its high speed complex digital sample rate of greater than 2.64 GHz, which in turn leads to a real time processing load of >2 Teraops to implement the signal processing needed for data rates up to 8 Gbps for the WiGig standard.  This is more than an order of magnitude higher than current wireless standards. This coupled with 802.11ac taking much of the engineering staff time in wireless semiconductor vendors has meant that only a handful of companies have been able to develop this technology, essentially the big three (Broadcom, Qualcomm, Intel) and dedicated 802.11ad IP developers, which will help the next wave enter the market as it takes off.

The first 802.11ad “WiGig” Wi-Fi chips are now beginning to enter the market, with the standard expected to be used in premium mobiles / tablets from this year and to ship in 10 per cent of mobile handsets, laptops, media players and tablets by the end of 2020.

The standard is in its early phases of growth, but as Strategy Analytics say: “[assuming] Intel pushes this [WiGig docking station] application successfully, volumes could reach many tens of millions of units per year in a high proportion of dockable PC devices.” The report also highlights that “premium tier smartphones and tablets will ship with 802.11ad starting in 2016” and that “Apple’s adoption… will surely have a big impact on the market.”

While WiGig has evolved as files sizes increase and video resolutions improve, 802.11ah has been developed to meet the needs of M2M systems in the industrial internet of things. It uses the 900 MHz band to transmit limited data volumes, but over a very long distance and consuming very little power to do this—applications tend to be isolated systems (often in cupboards, or underground), running off a single cell and requiring a lifespan of c.10+ years.

The IEEE is in the final phases of resolving the standard, and is likely to appear soon. However, there is much competition for these applications—with LTE-M proving to be among the favourites and— like 802.11ah—it combines the low-power, the range, and is based on a wellknown standard, this time 3 GPP.

Indeed, ABI has predicted just 11 million devices will ship by 2020.

This final one is still in its proposal stages, so much further off than HaLow, and especially WiGig, but 802.11af has been designed to use the unused white space TV spectrum frequencies to transmit higher volumes of data over exceptionally long ranges. Again, frequencies vary from country to country—from 54 MHz to 790 MHz—but this standard should deliver longer ranges than even 802.11ah (several miles) and will suffer from less interference.

However, white-space channels are not available for use everywhere and while perfect for remote locations, they are rarely permitted in big cities.