There’s no denying that technological innovation is affecting almost every aspect of people’s lives and individuals of all age groups, especially when it comes to communicating with each other. More than 40 percent of seniors 65 or older for example, own a smartphone, with applications like Skype and FaceTime that let people to keep in touch regularly. While these advances have made communication more accessible and convenient, there are still some situations where that isn’t the case.

One of the top concerns when choosing long-term care institutions for elderly relatives is the ability to stay in touch, which can be very difficult since many of these institutions suffer from poor reception. As someone whose grandmother spent more than a year in a nursing home before passing, I can attest to these frustrations. To make matters worse, facility owners are unable or unwilling to improve reception because of high costs (with some upgrades costing $2-4 per square foot) and the disruption such renovations will be to residents.

It’s these particular issues companies like Wilson Electronics are developing solutions for, like the passive distributed antenna system (DAS) technology. Contrary to disruptive active DAS systems, passive DAS only installs antennas where they’re needed in a building, instead of engaging in costly labor, like hardwiring fiber optics. Passive DAS technology works in locations with poor cellphone signals (like nursing homes), based on how those waves are filtered by materials like concrete, steel, and even vegetation, which weaken them before reaching their targeted point.

Passive DAS technology pulls in an existing signal over the air, combines all those bands while amplifying and enhancing each signal, and then rebroadcasts them throughout the building. Some think this technology can be instrumental for improving reception inside institutions like healthcare facilities, where those kind of buildings require having improved cell coverage for any carrier.

“Anybody in that building could have T-Mobile, Verizon, AT&T all at one time. Passive DAS is unique in that all those signals are already out there, and just have trouble propagating, during which they weaken and fade as the signals go through buildings,” says Jeff Gudewicz, Chief Product Officer at Wilson Electronics when I spoke to him last week. “An outdoor antenna called a ‘donor’ collected all available signals regardless of how strong or weak they are outside, and send them into a bidirectional amplifier unit. They then take one signal cable and split all those different carrier signals into separate bands, sense their levels, and amplify all of them to the maximal extent. All of those are combined into another single cable, and we have an antenna system inside the building that rebroadcasts the stronger signal inside.”

“Builders now put metal film on coatings and windows to make them more energy efficient, which is something that blocks signals even more. Construction firms for example, are using more steel than lumber, and while metal weakens a cellphone signal, it’s good for the environment and building’s energy efficiency,” says Gudewicz when discussing why cellphone reception is so poor in these structures. “We all have experienced going into an elevator during a cellphone conversation and lose whoever we are talking to once we step inside. This is because those signals can’t get entirely through a window, building interior, concrete in the elevator lining, and inside the steel cart. All those things continue to weaken the signal until the phone can’t hear and just drops the call.” 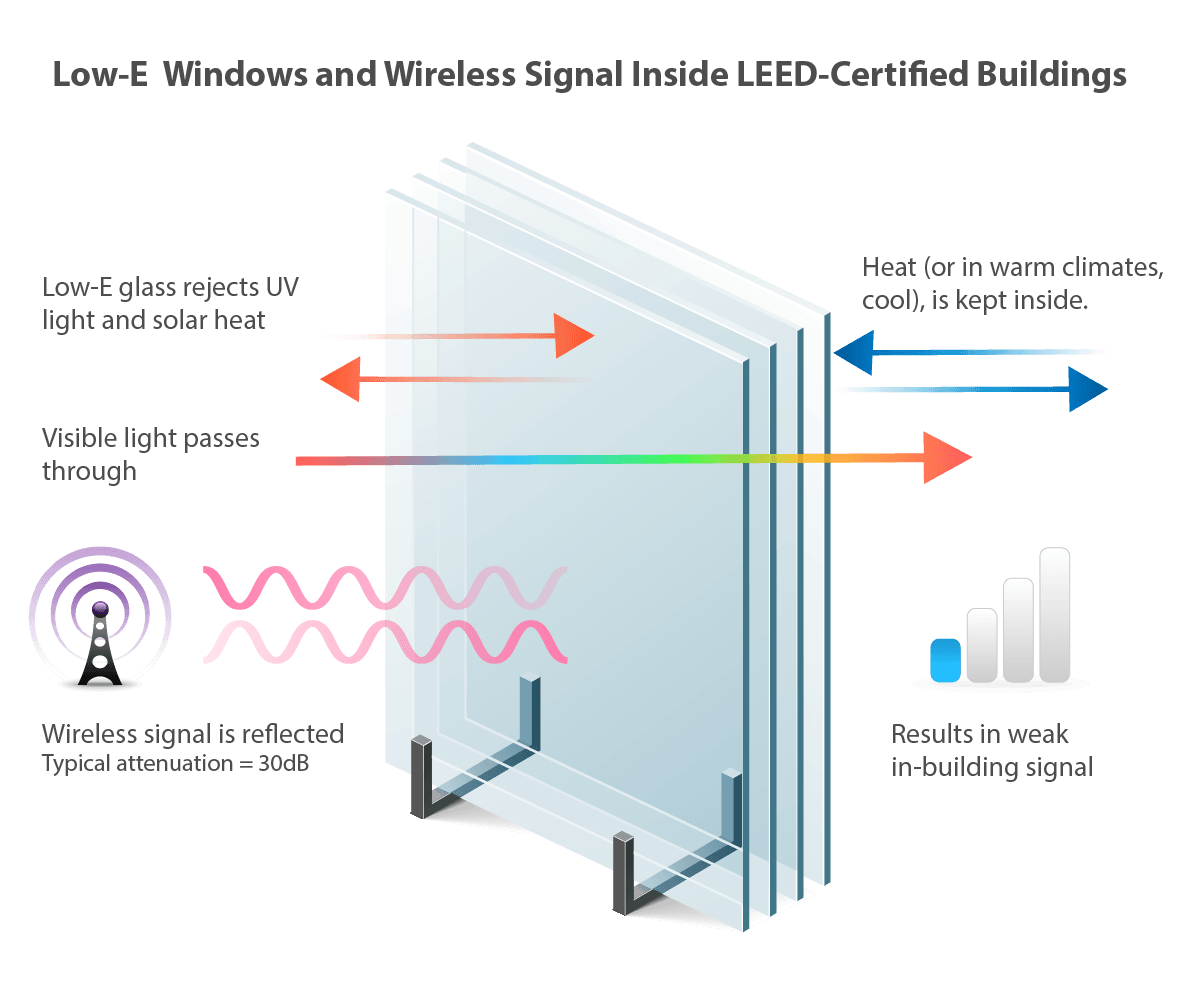 One of the examples Gudewicz used to describe how a cellphone signal wave stretches (and weakens in the process) was traveling further away from an FM station in one city or region. You always lose that city’s radio station and pick up the next one you’re driving in the direction toward. According to Gudewicz, wireless or cellular signals broadcasted over the air and certain factors like time, distance, and terrain, cause those signals to gradually fade or get absorbed as the distance grows.

Aside from being more effective than the traditional methods of propagating stronger cellphone reception, passive DAS technology can save health and long-term care facilities money. In B2B space, several years ago, corporate customers of a carrier could have up to 2,000 cellular lines through that provider. If a company had a lot of dead zones or bad signals in their building, they would have to call their carrier and inform them of the issues. Operators would traditionally come to the building and do something known as carrier subsidizer or utilize carrier-funded data. Upon arriving to the site, the operator would put in a distributed antenna amplifier system (that was usually more expensive, but would be paid for by the carrier). By doing this however, this installation and resources it provided would be considered as another utility by the carrier.

“If you need cellular coverage in your building, you need to pay for that yourself. The carriers started charging people for these systems, which were very expensive because they have amplification just for that operator,” says Gudewicz. “They don’t connect over the air, but through a high-capacity fiber line physically coming into the building, which required maintenance costs. As a result, you must have a dedicated fiber line that can cost several thousand dollars a month. Equipment is typically six to seven figures in cost, while maintenance and contracts come out of your pocket.”

Since passive DAS technology does everything over the air, operators can eliminate a lot of equipment costs. Now buildings get the array of carrier signals enhanced in their building at lower price points, resulting from smaller form factors, and technology enhancing all signals from across the air space without requiring these a lot of backhaul or ongoing maintenance.