Subaru Telescope images reveal weather in Jupiter’s atmosphere in the mid-infrared. Those images, taken multiple times over several months, support Juno spacecraft mission of National Aeronautics and Space Administration (NASA). This article is part of a joint press release with ones from Jet Propulsion Laboratory (JPL) at California Institute of Technology and Gemini Observatory.

High-resolution thermal imaging of Jupiter by the COoled Mid-Infrared Camera and Spectrometer (COMICS) mounted on the Subaru Telescope on Maunakea is providing information that extends and enhances the information that the Juno mission is gathering in its unprecedented mission to probe that planet’s interior and deep atmospheric structure together with details of the magnetosphere and its auroral interactions with the planet. “The Subaru observations of Jupiter so far this year have been timed to coordinate with the greatest benefit to Juno mission”, said Glenn Orton, PI for the portion of the Keck Telescope exchange time with the Subaru Telescope and coordinator for Earth-based observations supporting the Juno project at JPL.

“During our May 2017 observations that provided real-time support for Juno’s sixth perijove, we obtained images and spectra of the Great Red Spot and its surroundings. Our observations showed that the Great Red Spot, the largest known vortex in the solar system, had a cold and cloudy interior increasing toward its center, with a periphery that was warmer and clearer. This implied that winds were upwelling more vigorously toward its center and subsiding on the periphery. A region to its northwest was unusually turbulent and chaotic, with bands that were cold and cloudy, alternating with bands that were warm and clear bands (Figure 1). This region is where air heading east toward the Great Red Spot flows around it to the north, where it encounters a stream of air flowing over it from the east”, adds Orton. “This information will allow us to determine the three-dimensional structure of winds that are otherwise only tracked in two dimensions using cloud features in reflected sunlight.” “A wide variety of filters installed in COMICS is advantageous in sensing Jupiter’s temperatures in its upper troposphere and in its stratosphere,” noted co-investigator and Subaru Telescope staff astronomer Takuya Fujiyoshi.

Juno has now made five close-up passes of Jupiter’s atmosphere, the first of which was on August 27, 2016 and the latest (the sixth) on May 19 of 2017. Each of these close passes has provided Juno’s science team with unexpected surprises, and the Juno science return has benefitted from a coordinated campaign of Earth-based support. This campaign includes observations from spacecraft near or orbiting the Earth, covering X-ray through visible wavelengths and ground-based observatories covering near-infrared through radio wavelengths.

Another set of supporting observations that were simultaneous with the Subaru observations were made by the Gemini North telescope’s NIRI instrument, which imaged Jupiter in the near-infrared, measuring reflected sunlight from cloud and haze particle in Jupiter’s upper troposphere and lower stratosphere – levels generally higher in Jupiter’s atmosphere than most of the Subaru measurements, providing complementary information. “Wide coverage of wavelength available from the telescopes on Maunakea is thus advantageous for the study,” Fujiyoshi says.

The NASA Juno spacecraft was launched in August 2011 and began orbiting Jupiter in early July 2016. A primary goal of the mission is to improve our understanding of Jupiter – from its atmospheric properties, to our understanding of how Jupiter and other planets in the outer Solar System formed. Subaru’s mid-infrared imaging and spectroscopy with COMICS are particularly useful to Juno’s instrument, by providing information about the temperature field and the distribution of ammonia, a condensate in Jupiter similar to water in the Earth’s atmosphere. These serve as boundary conditions for the distribution of ammonia at this level and much deeper in Jupiter’s atmosphere.

In the full campaign of Earth-based support, the Subaru observations provide the highest spatial resolution of Jupiter’s thermal output due to the 8-meter size of its primary mirror. For the images of Jupiter’s Great Red Spot in May 2017, COMICS could resolve features close to the 1,000-km resolution of Juno’s MWR experiment.

“The Subaru Telescope provided the highest spatial resolution of heating in Jupiter’s stratosphere from auroral-related processes, notes co-PI Yasumasa Kasaba of Tohoku University, Japan, who was the PI of collaborative telescope time granted directly by Subaru Telescope. He also notes, “This heating will be studied and compared with auroral phenomena in the ultraviolet and near-infrared observed by Juno and other ground-based facilities, as well as the Hubble Space Telescope and JAXA Hisaki UV/EUV space telescope with Tohoku University’s Haleakala telescope and many others.” A full list observatories active in the Juno support observations and details of their observations is given in this page. 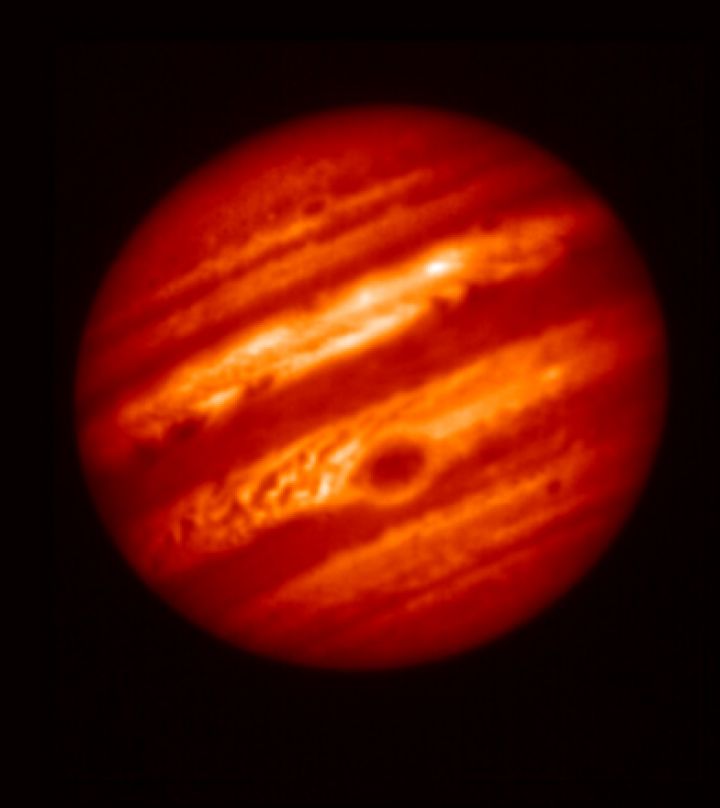