A radio telescope at the U.S. Department of Energy’s (DOE) Brookhaven National Laboratory has received a significant upgrade, advancing from one dish to four. The upgrades are part of the Laboratory’s ongoing effort to test the merits of a radio telescope for a potential future project between national labs and DOE-sponsored universities. The scientists’ ultimate goal is to look deep into the universe and gain a better understanding of periods of accelerated expansion and the nature of dark energy.

“In the study of the universe, the first goal is to survey large-scale structures over as much cosmic volume and time as possible,” said Anže Slosar, a physicist at Brookhaven Lab. “Now, we are experimenting with a new technique that relies on radio waves, and it could enable us to observe the universe much more efficiently.”

Mapping the universe with radio waves

Cosmologists primarily use optical telescopes—telescopes that observe space through visible light—to study galaxies and their distributions in space and time. Optical telescopes can detect the faint light emitted from galaxies that are so far away from Earth that their light has taken 11 billion years to reach us. But radio telescopes, which detect radio waves produced at a particular wavelength by hydrogen gas in distant galaxies—a research field called 21 centimeter cosmology—can enable scientists to “see” a different picture of the universe.

“Compared to optical telescopes, radio telescopes could also see further out—further back in time and further distances in the universe,” said Paul Stankus, a physicist at Oak Ridge National Laboratory and a collaborator on Brookhaven’s radio telescope.

Radio telescopes have a similar design to optical telescopes; they both include a camera and a focusing element that reflects light to generate an image of the universe. But instead of having a glass mirror that reflects visible light, radio telescopes can use a metal reflector dish that costs about 100 times less than a glass mirror of the same size, making them a much more cost-effective way to observe the universe.

Traditional radio telescopes for astronomical studies use large radio dishes, or a collection of widely separated dishes, to obtain high resolution images of individual celestial objects. For Brookhaven’s cosmological applications, however, a different kind of radio telescope is needed: one that can observe large patches of the sky with modest resolution, and can detect changes in the intensity of incoming radio waves with extreme precision.

“For our purposes, seeing a very blurry picture of the universe is okay because we are not interested in observing individual objects. We want to measure big swaths of the universe,” said Slosar. “Using radio emissions to measure structures in deep space over very large volumes will help us gain a better understanding of the fundamental properties of our universe.”

The current radio telescope on site at Brookhaven Lab is a small prototype, and it was first installed in 2017. Initially, the prototype served as a testbed for scientists to manage radio frequency interference generated by the nearby weather radar, broadcast TV, and cell phone towers. Understanding how to mitigate these large sources of interference will prepare the group for managing smaller sources of interference if a larger telescope is constructed on a more remote site.

During the first months of observations, the scientists detected this expected interference, but they also found something more unusual. 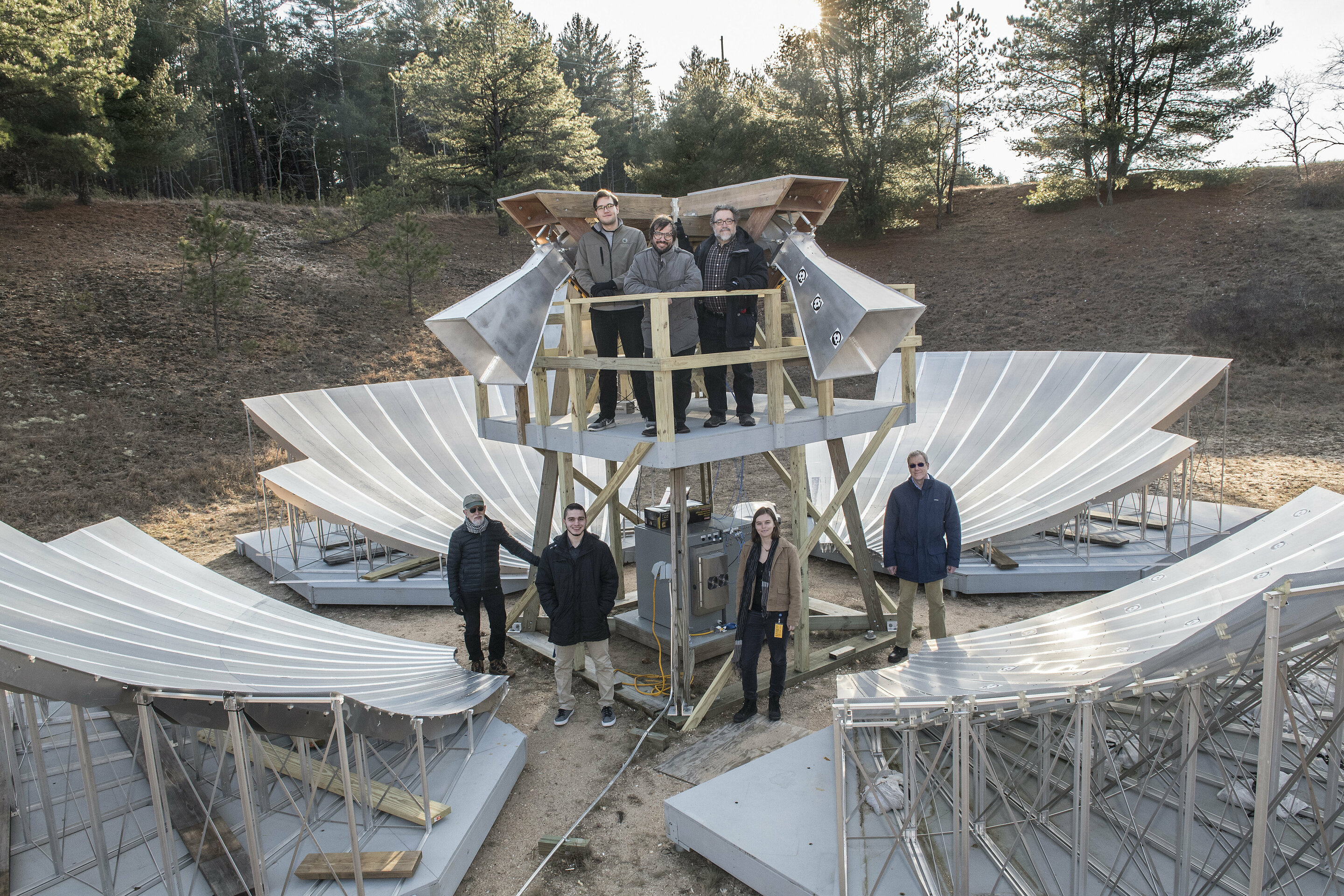 Scientists at Brookhaven Lab are using a prototype radio telescope to look deep into the universe and gain a better understanding of its accelerated expansion and the nature of dark energy. (Image Source: US Department of Energy)

“We saw mysterious signals that seemed to be coming from an astronomical radio source,” said Paul O’Connor, a senior scientist in Brookhaven’s instrumentation division. “They reappeared at the right time interval, but not quite at the right angle and position of the sky, and without the expected frequency spectrum.”

After characterizing the signals and calibrating the telescope, they determined that the signals were coming from navigational satellites whose orbits happened to pass directly over the dish.

“Our radio telescope can see dozens of navigational satellites from around the world, but that’s not really an achievement,” Slosar said. “These satellites are so powerful that our phones can see them. The achievement was detecting these satellites beyond their allocated frequency band, where they are about 1,000 times less powerful.” This low power signal is still capable of causing problems for radio telescopes, so identifying the signal and learning how to work with it is a crucial step towards preparing for a larger radio telescope project.

From one dish to four

Successful measurements in the first year of observations and additional funding through Brookhaven’s Laboratory Directed Research and Development program have enabled the researchers to enhance the prototype telescope and collect more advanced data. Most significantly, the telescope has been upgraded from one dish to four.

“Having four dishes enables us to use a technique called interferometry, where you can combine signals from two dishes,” Slosar said. “Now, the four dishes will act like one very large dish. This is a standard technique in radio astronomy, but it is important that we test its functionality in our prototype in order to prepare for a larger experiment in the future.”

O’Connor added, “the dish construction was largely student-led. We had seven students working on the telescope last summer and we have more coming this year.”

In the years to come, the prototype telescope will continue to serve a testbed for interferometry and other research techniques that the scientists hope to use in a larger experiment. Other plans include using drones that carry radio sources to calibrate the telescope.

“We’ve always had the plan to go from one dish to four, and now that we’ve done that, we consider the design of this testbed instrument complete,” Slosar said. “When we’re ready for further upgrades, those will be planned for a bigger experiment. For now, this prototype will be a long-term testbed while we transition to the research and development phase for a larger project.”

So far, the prototype has already proven itself as promising new way to “see” the universe.

“We’ve compared our data to existing data that radio telescopes have produced of the Milky Way, and it matches perfectly,” said Chris Sheehy, a physicist at Brookhaven. “The difference is that the ‘bandwidth’ of our prototype is increased by a factor of 100. So, while other experiments have mapped the Milky Way at a very narrow frequency band, we see that range as a narrow stripe in our data, and we can also see a factor of 100 more.”

Regarding a larger radio telescope project, the researchers are continuing to collaborate with other national labs and DOE-supported universities to build a case; they’re designing a concept that they hope to see come to life in the next 10 years. Successful observations from Brookhaven’s prototype would be one of many important examples to support a case for such an experiment on a larger and international scale.