5G, the 5th generation wireless mobile network, promises extremely high data rate wireless connection, such as 4k/8k ultra high definition TV streaming. The Internet-of-Things (IoT) is the networking of things around us—from personal gadgets to industrial sensors and freight tracking around the world. By 2020, over 50 billion IoT objects are forecasted to be in operation, placing tremendous work and pressure on RF and microwave engineers to design and build 5G and IoT products quickly to compete for a share of the market.

Designing and building RF systems to operate at 24 GHz and above is challenging due to the parasitics of interconnects, peripheral biasing and passive components, and the absence of simulation models of available system components. Calculating with spreadsheets and then breadboarding with actual hardware is very costly in terms of time, instrumentation, and effort for every ensuing iteration.

Fortunately, a more efficient approach in designing, prototyping, and realizing RF systems in one pass is now possible. Figure 1 shows the block diagram of a 5G system with 28 GHz RF input and two down conversion LOs at 22 GHz and 7 GHz to a 1 GHz IF. The block diagram is simulated in a system simulator with system blocks modeled as: 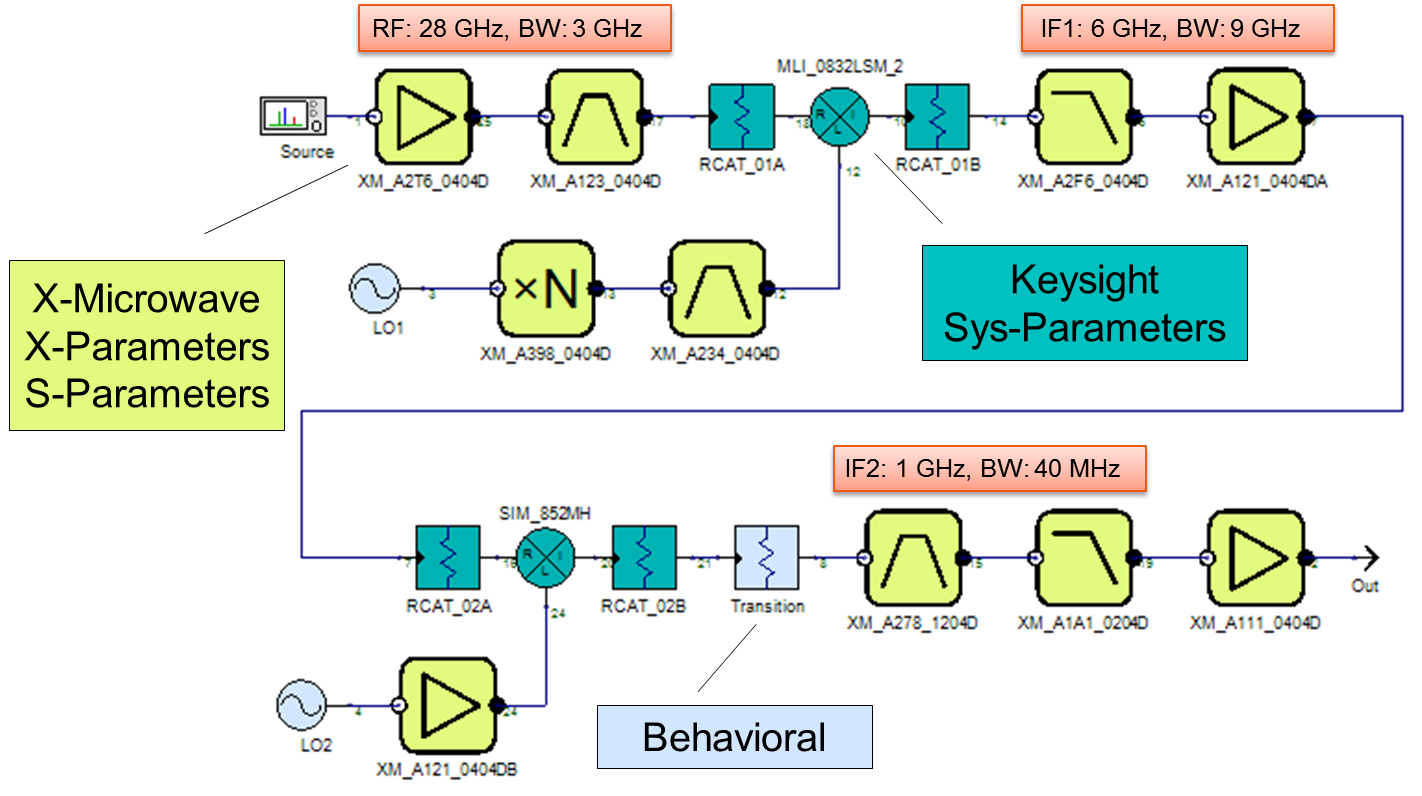 Figure 1: 28 GHz 5G RF receiver system with dual down conversion to 1 GHz IF.

RF system simulation technology has come a long way since the use of spreadsheets. Improvements in accuracy and diagnostic capabilities are significant. An example of these improvements includes identifying the component origin and frequency equation of nonlinear intermods and which system blocks (and their specs) in the system lineup are contributing to performance degradation such as Error Vector Magnitude (EVM), BER, and ACPR under digital modulated RF stimuli.

Figure 2 shows the budget analysis of EVM error versus system component lineup, which instantly identifies the major contributors of EVM degradation as LO phase noise and linearity of mixer and amplifiers. Clicking on the culprit components enables their offending specs to be adjusted in order to improve the system performance. This enables proper selection of system component lineup without over or under spec’ing them—achieving the best performance with minimum cost.

Specifying the behavioral specs during design and then trying to find real components that have such specs during realization is a common but inefficient approach that inevitably results in multiple iterations. Sys-parameters representing simulatable datasheets of real off-the-shelf components or X-parameters of measured nonlinear components can be used directly in RF system simulation so that when the design is complete, parts have also been already specified and verified to work in the system chain. The system is now ready for hardware implementation. 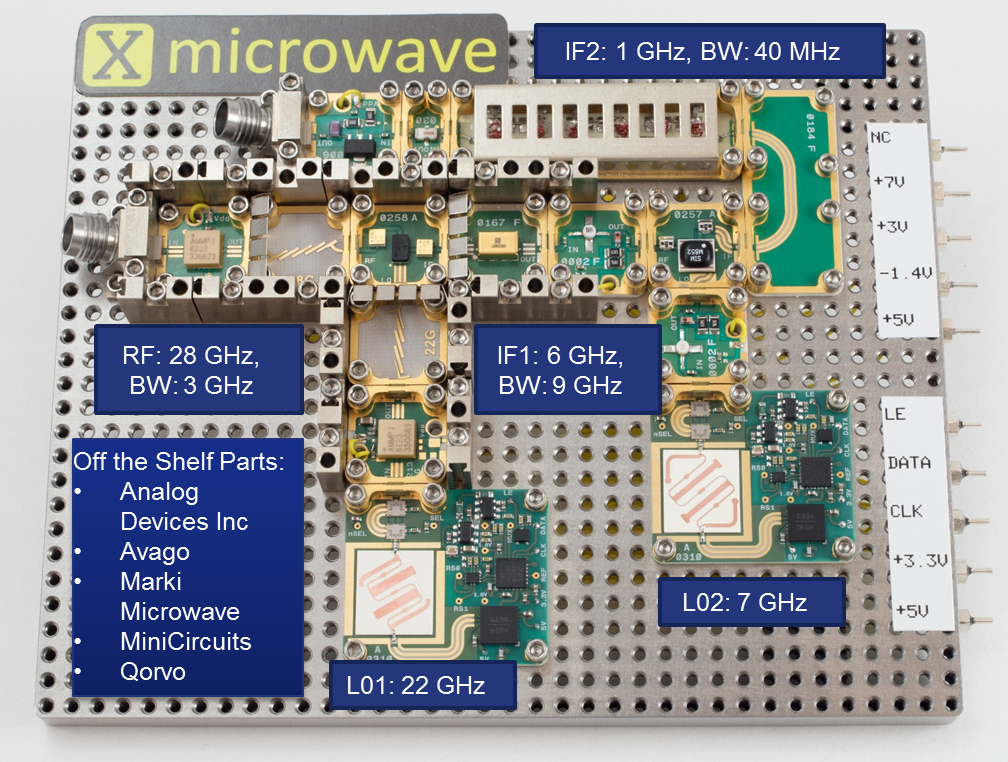 Off-the-shelf parts implemented into modular tiles were used in the realization of the 28 GHz 5G RF receiver system, as shown in Figure 3. Each modular tile, called an X-Block, includes all the biasing and peripheral passive components for the active device, such as LOs, mixers, and amplifiers. They are characterized by measured X-parameters or Sys-parameters at their co-planar interconnect reference planes for simulation to accurately model how they are being used in the actual system hardware. They are connected together by a flipped, co-planar laminate that spans the small gap between the X-blocks and is held down by compression, without soldering, to work reliably up to 67 GHz. The 1.9 mm test launchers are also held down by compression so that the X-blocks can be reused with no damage. When the prototype is finalized, the same composite layout can be used directly for production since they’re all built on the same laminate material.

When the system was measured, the agreement with the simulated result was unexpectedly close (as shown in Figure 4) and is within the uncertainty error of the vector signal analyzer.

Designing for the Internet of Things

Multiple standards are emerging for IoT radios based on range of coverage, data bandwidth, and operating frequencies. The IoT frequencies can be broadly divided into two categories: sub 1 GHz and those above—namely around the 2.4 GHz and 5.8 GHz ISM (Industrial, Scientific, and Medical) bands. From the perspective of designing IoT physical radio links that work at these frequency bands, the main focus should be on impedance matching the IoT chipset to the antenna. For a longer range, amplifiers may be inserted in between the chipset and the antenna.

Ideally, the impedance matching network has to be compact and economical to build. Multistage impedance matching over a broad bandwidth (30 percent or more) to complex frequency-dependent impedances such as an antenna, measured S-parameters of an IoT chipset or an unstable non-unilateral discrete transistor amplifier is extremely difficult and tedious using traditional Smith chart or benchtop cut-and-try techniques.

Figure 5: impedance matching synthesis and microstrip layout of three-stage matching network from 2 to 3 GHz to achieve 20 dB return loss and 35 dB gain is done in < 1 hour.[/caption]

A more efficient and optimal approach is the use of automatic impedance matching synthesis, which employs multiple algorithms, from simple L-sections to the Real-Frequency-Technique, for addressing the increasingly difficult above-mentioned impedance matching problems. Because synthesis can accomplish difficult simultaneous multi-stage matching in seconds with distributed and/or lumped networks, the IoT radio designer can quickly experiment with multiple matching topologies to select one that is most economical to build. Figure 5 shows the result of three-stage, simultaneous matching of an antenna to a low-noise stabilized transistor amplifier circuit, followed by the measured S-parameter of a chipset power amplifier to achieve -20 dB return loss match from 2 to 3 GHz and a gain of 35 dB. The microstrip layout dimensions were also synthesized with the automatic insertion of discontinuities, such as tees and open stubs. The entire process was completed within one hour.

RF systems for 5G and IoT applications can now be efficiently simulated, prototyped, and produced with off-the-shelf system components thanks to breakthrough diagnostic capabilities that pinpoint wrongly spec-ed components in the system lineup. Accurate X- and Sys-parameter simulation models of off-the-shelf RF system components enables what-you-simulate-is-what-you-get efficiency when going from design to prototype and production without any iterations. Impedance matching synthesis replaces tedious manual design and optimization with an instant selection of various suitable matching topologies for the most economical realization.