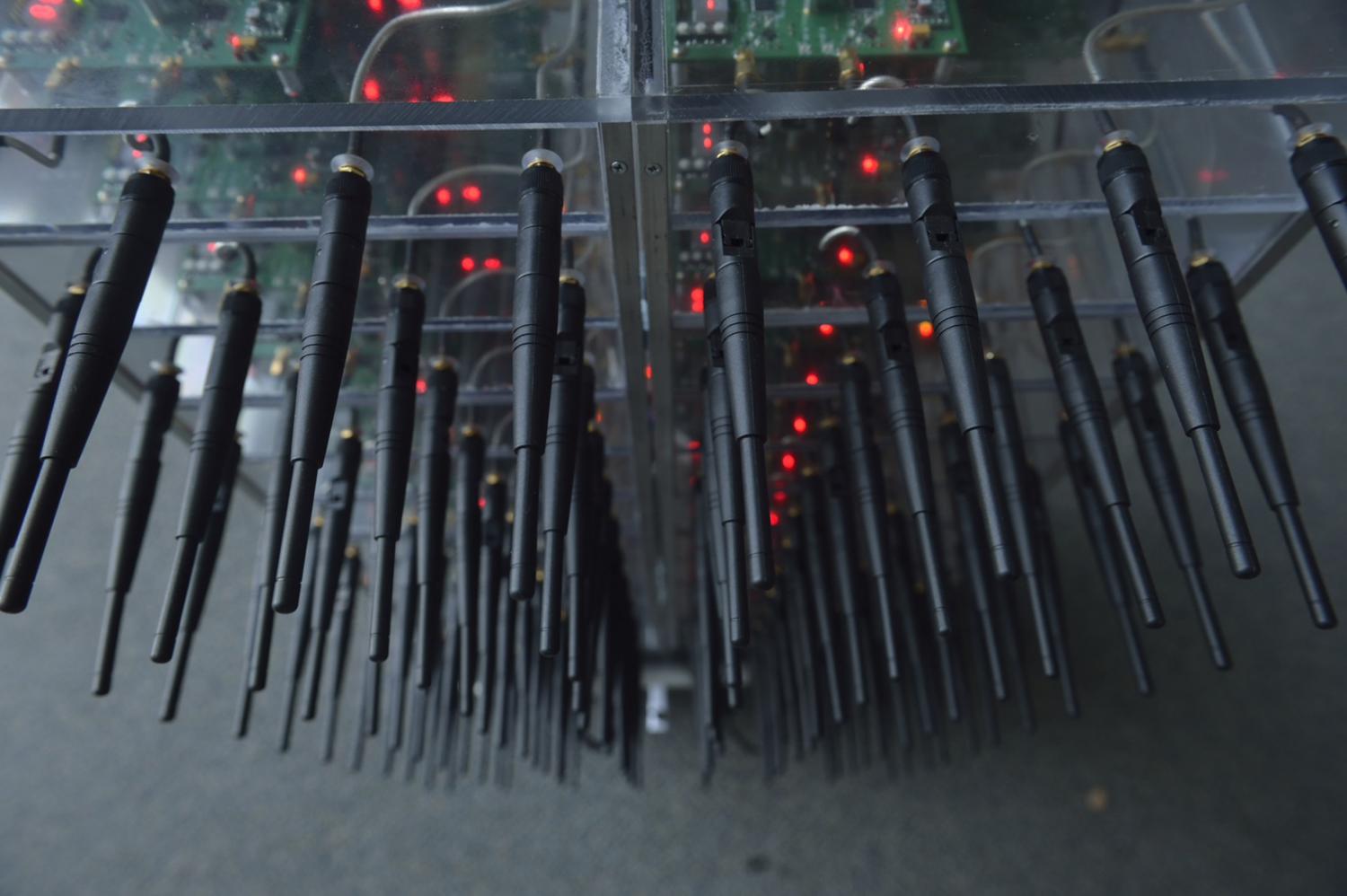 Rice University’s Argos Network will use base stations with more than 100 antennas apiece to share spectrum by beaming information directly to many users simultaneously on the same frequency. (Credit: Jeff Fitlow/Rice University)

Rice University researchers have won $2.4 million from the National Science Foundation (NSF) to conduct the most extensive experimental research yet of wireless technology that uses 100 or more antennas per base station to send tightly focused beams of data to each user, even as they move.

The research at Rice’s campus in Houston will help the wireless industry determine whether and how to include the many-antenna technology—known in industry parlance as “massive multi-user, multi-input multi-output,” or massive MU-MIMO—in upcoming 5G wireless standards.

“Early tests of many-antenna technology at Rice and elsewhere suggest that wireless carriers could use this technology to serve many times more data than can be served with today’s 4G networks,” said Lin Zhong, associate professor of electrical and computer engineering and of computer science at Rice and the principal investigator on the new grant. “But there are still many questions about how to scale this technology for real-world implementation. Those are the challenges we’ll be tackling with the new research.”

The research will make use of ArgosNet, a many-antenna experimental test bed that Zhong’s Efficient Computing Group is building thanks to a 2014 NSF infrastructure grant. ArgosNet will eventually include up to a half-dozen programmable base stations, each with 100 or more antennas. Zhong’s team will be able to reconfigure each to emulate cell-tower base stations or other types of wireless network nodes. The many-antenna technology being investigated leverages a large number of base station antennas to serve many users at the same time. When the number of base station antennas is significantly larger than the number of users, the technology is also referred to as “massive MIMO.”

“Large-scale multi-user MIMO technology is a key enabler in meeting the 1,000x data challenge—that of increasing spectrum efficiency by a factor of 1,000 when compared to current 4G data networks,” said NSF Program Director Thyaga Nandagopal. “The National Science Foundation has funded basic research in this area for several years now, and this project will advance this research to the next level by addressing the system-level challenges that can hinder the realization of this technology’s full potential.”

Today’s top-of-the-line 4G wireless data networks serve data to millions, but each base station only communicates with up to four users at a time on a given frequency. They appear to serve thousands simultaneously by dividing their time and frequency to serve tiny slices of data to each user every few milliseconds. Ideally, users never notice they are sharing the network, but data rates can slow if too many users are online at once, and based on industry trends, slowdowns will become more common.

Zhong said the new experimental research with ArgosNet, which draws its name from the many-eyed giant of Greek mythology, could provide the answer that wireless carriers need for the coming bandwidth crunch. ArgosNet uses its many antennas to beam information directly to numerous users simultaneously on the same frequency. It does this by constantly computing where each user is and altering the signal to each antenna to direct a focused beam directly to each user.

The payoff can be enormous, because carriers can use limited frequency bands to serve many more users, but there are also complications. The computing power needed to both track users and continuously form and re-form beams in real time is significant, Zhong said. There are also issues related to interference because each wireless device must regularly broadcast so that the base station knows where to focus the beams.

Among the ArgosNet team members is Clayton Shepard, a Ph.D. student who is building the ArgosNet base stations and mobile clients, and who’s already worked with NASA to test massive MIMO designs using specialized facilities that were originally built to test spacecraft communications systems.

“ArgosNet is a very flexible platform,” Shepard said. “We’ve designed it to work like Lego blocks; we can add or subtract antennas and other components to construct any kind of node that we want. The wireless test units also can be configured to act like everything from a laptop to a wireless handset.”

Shepard said the flexibility will allow the newly funded project team to evaluate the overhead computing demands for beam-forming, interference from pilot signal traffic, as well as how MU-MIMO might be co-implemented with “densification,” another potential 5G technology that calls for deploying many more base stations to make the best possible use of limited radio spectrum.

“MU-MIMO will almost certainly be included in the specifications for 5G, but no one knows how many antennas to call for because the trade-offs between cost, size, power and performance haven’t been determined,” Shepard said. “We’ll be able to evaluate each of these and answer other questions about how to implement this technology in the real world.”