A novel attachment to the Soldier’s assault pack might someday reduce the number of batteries carried to power night-vision devices, radios and other equipment, as well as help make dismounted patrols less fatiguing.

Courtney Webster, a biomedical engineer with the Army Research Laboratory, or ARL, is in the middle of testing with her team the prototype “Energy Harvesting Backpack” at the Soldier Performance and Equipment Advanced Research, or SPEAR, facility here.

A frame mounted to the standard-issue assault pack contains a two-spring, rack-and-pinion suspension system that allows it to gently glide up and down as the Soldier is walking or running, Webster said.

As the assault pack moves, the mechanical energy produced by the motion recharges the Soldier’s battery, she said.

The other thing that happens is that the up-and-down motion is gradual and controlled. Without the attachment, this is not the case, she said, providing a comparison to a backpack full of school books that “bounces and slams your shoulders when running.” 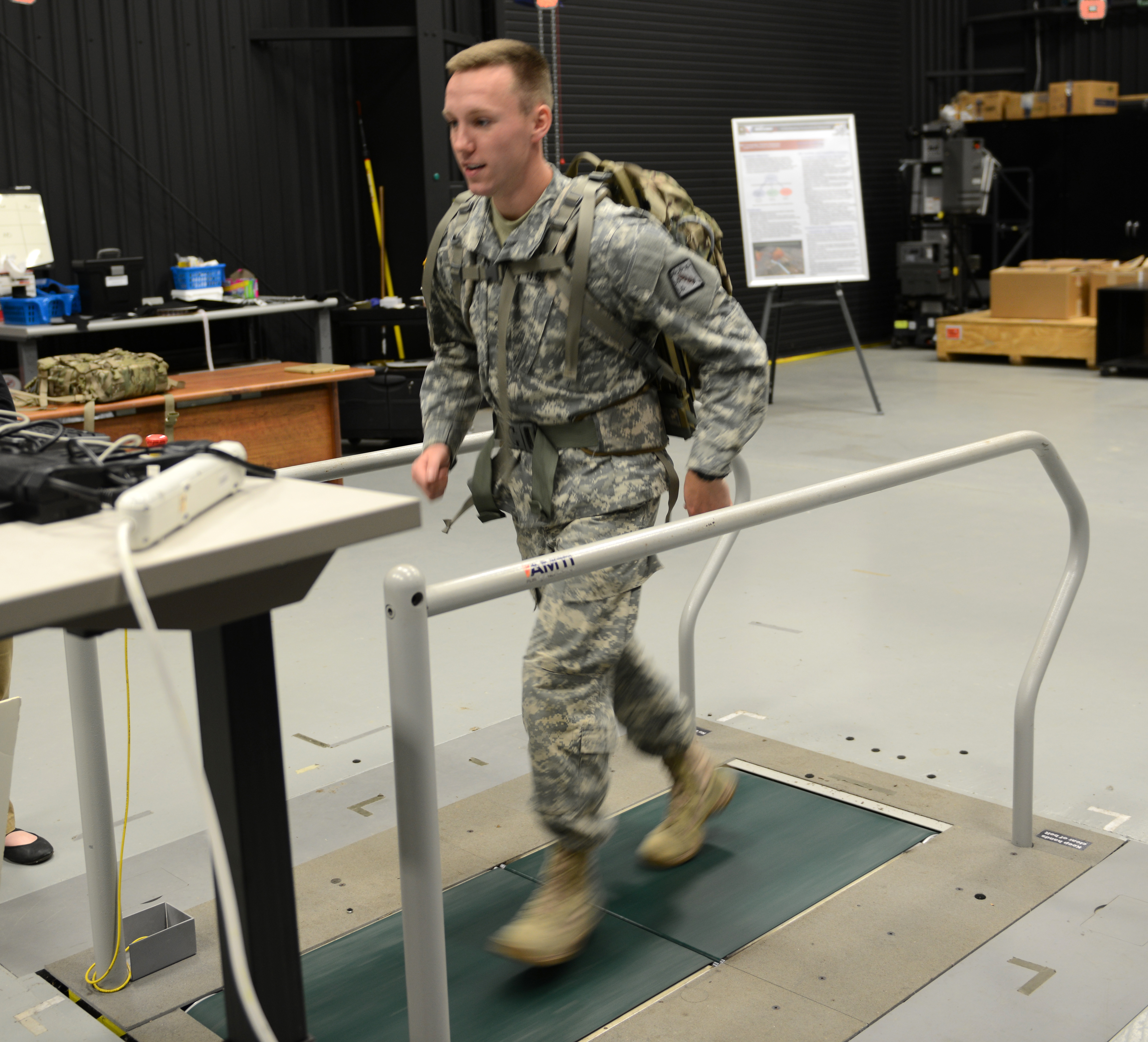 The SPEAR facility, which resembles a warehouse about the size of a basketball court, has the requisite capabilities to measure fatigue as well as energy produced by the device.

In the middle of the facility’s concrete floor is a pit, similar to the ones in auto mechanic shops, but smaller. Inside the pit is an industrial treadmill that’s mounted atop force plates. The top of the treadmill is parallel to the floor.

About 12 feet above the floor are a dozen cameras surrounding and pointed at the treadmill. Attached to each camera is a near-infrared light and sensor. The infrared shines harmless waves of light onto the test subject who’s fitted with an array of reflectors, she said. The sensors then communicate in 3-D the exact location of the test subject’s position, velocity and acceleration to computer software. The purpose is to decipher the test subject’s “joint kinematics,” or movement, to determine how the load is affecting the Soldier’s gait.

The 3-D images and data are invaluable biomechanical indicators of poor or good posture, she said. This will determine if an individual’s gait is making the subject more or less susceptible to injury.

Finally, the charge of the battery is measured to determine how effective the attachment is in generating power, she said.

Thus far, 12 Army civilians and contractors have been tested, Webster said, noting that there are not that many Soldiers on Aberdeen to test, and that Soldier testing will definitely take place, but only once the system matures past the preliminary research phase.

Among the test subjects, there were both males and females of varying heights and weights.

Each camera has a near-infrared light and sensor. The infrared shines harmless waves of light onto the test subject who’s fitted with an array of reflectors. The sensors then communicate in 3-D the exact location of the test subject’s position, velocity and acceleration to computer software. The purpose is to decipher the test subject’s “joint kinematics,” or movement, to determine how the load is affecting the Soldier’s gait. (Credit: Todd Lopez)

Webster declined to give findings and conclusions, since testing is still underway. She did, however, provide some observations.

Reception to the comfort of using the Energy Harvesting Backpack varied, with some saying they felt the motion of the pack threw them off balance. “No one expressed discomfort as much as feeling unstable.” She added that it’s possible that given time using the device, the test subjects might become accustomed to using it and might change their opinions. However, lengthy trials were not run, as each test was limited to 10 minutes per person.

Others thought the Energy Harvesting Backpack was a lot more comfortable than an assault pack without the device, she said. This information was gleaned from questionnaires administered following the testing.

On Nov. 3, ARL held an open house. On that day, two mechanics from the motor pool of 20th Chemical, Biological, Radiological, Nuclear and Explosives Command here tried the Energy Harvesting Backpack for the first time. Both were accustomed to using the assault pack.

Pfc. Austin Penwell said “it felt weird at first,” but it soon became “more comfortable than my normal rucksack. The weight distribution is perfect. I could wear this all day, running or walking. It doesn’t move around as much as a regular rucksack would. It’s pretty stable. It’s very smooth.”

Pfc. Kenneth Blandon declared it “very comfortable. It feels good.” And, he added that his assault pack, minus the device, “goes all over the place and jumps around” when he’s wearing it.

Perhaps the biggest limitation of the device, Webster said, is that it weighs 15 pounds. That’s not insignificant because Soldiers are already heavily loaded down.

The weight offset would be fewer batteries to carry, and each battery is about the size of a paperback novel – not the tiny batteries found in stores. The other offset would be creating a lighter device. But that would be in the future, she said. For now, testing for weight wasn’t a goal, “we’re just trying to determine the energy output we get. We need that knowledge first before proceeding.”

The immediate goal is to get a total of 20 people tested, Webster said. At that point, all of the data will be aggregated and results will be published. That should happen by this coming spring.

All of that data will also be fed to the U.S. Army Communications-Electronics Research, Development and Engineering Center, or CERDEC, the organization that requested ARL do the testing, she said.

Incidentally, CERDEC has been in partnership with Lightning Packs, LLC on the design of the Energy Harvesting Backpack, she said.

Webster also said that ARL has, in the past, worked with the Defense Advanced Research Projects Agency, or DARPA’s Warrior Web Program. The Warrior Web program seeks to develop the technologies required to prevent and reduce musculoskeletal injuries caused by dynamic events typically found in the warfighter’s environment.

She said DARPA might find the testing results quite informative as well.

“Everything we see is fairly early on in the prototype phase; hopefully it will be fielded to Soldiers someday,” Webster said.