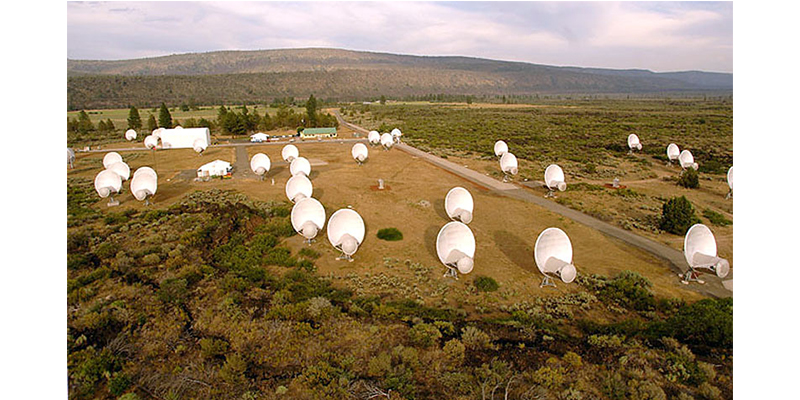 “We either caught something shortly after an event like two planets crashing together or alien intelligence,” said Dr. Gerald Harp, senior scientist at the SETI Institute in Mountain View, California, referring to the baffling light variations seen in the Kepler star KIC 8462852.

And he and a team from the Institute are working hard at this moment to determine which of the two it is.

Beginning last Friday (Oct. 16), the Institute’s Allen Telescope Array (ATA) was taken off its normal survey schedule and instead focused on KIC 8462852, one of the 150,000-plus stars studied by NASA’s Kepler Mission to detect Earth-sized exoplanets orbiting distant stars.. The array of 42 dishes comprises a fully automated system that can run day and night, alerting staff whenever an unusual or interesting signal has been detected.

A swarm of comets has been proposed to explain the erratic and non-repeating light variations seen in the star located nearly 1,500 light years from Earth in the constellation Cygnus the Swan. But no one really seems satisfied with the explanation, and the chances that we’d catch a huge event like a comet breakup or planetary collision in the short time the star has been under observation seems unlikely. Collisions also generate dust. Warmed by the star, that dust would glow in infrared light, but none beyond what’s expected has been detected.

The ATA picks up radio frequencies in the microwave range from 1-10 gigahertz. For comparison, your kitchen microwave oven produces microwaves at around 2 gigahertz. Although Harp couldn’t reveal the team’s results yet—that will come soon when a paper is submitted in few weeks in a science journal—he did share the excitement of a the hunt in a phone interview Tuesday.

The array normally looks for a very narrow wave or specific frequency when hunting for potential “ET” signals. But not this time.

“This is a special target,” said Harp. “We’re using the scope to look at transmissions that would produce excess power over a range of wavelengths.” Perhaps from a potential alien power source? Maybe. Harp believes the star’s peculiar, a-periodic signal is “probably natural and definitely worth looking at” but considers an intelligent source a possibility, however remote.

During our conversation, he emphasized how special the light variations from the star were, adding how the “big gob” of material orbiting KIC (stands for Kepler Input Catalog) 8462852 is unusual in that it’s “clumped”. “We expect it to spread into a ring,” he said.

Meanwhile, the American Association of Variable Star Observers (AAVSO) published an Alert Notice this week requesting amateurs and professional astronomers around the world to immediately begin observing KIC 8462852 now through the end of the current observing season. To locate the star, you can either use the charts provided in our previous story or go to the AAVSO site and type in KIC 8462852 in the “Pick a Star” box to create a chart of your own.

I’m a variable star observer, so naturally I thought of variables with irregular fluctuations in light when I first heard about this stellar mystery. Time to talk to an expert. According to Elizabeth Waagen, senior technical assistant for science operations at the AAVSO, KIC 8462852 is different.

“Based on the information so far, it doesn’t seem to fit the criteria for an irregular variable,” said Waagen in a phone interview this morning. “It’s doesn’t add up.”

She encouraged an open mind. “It’s a big puzzle, so we sent out the notice,” referring to the alert described above.

All quite exciting, and I’m as eager as you to see the published results on the signals, which Harp said would appear or link from the SETI website soon. Stay tuned…