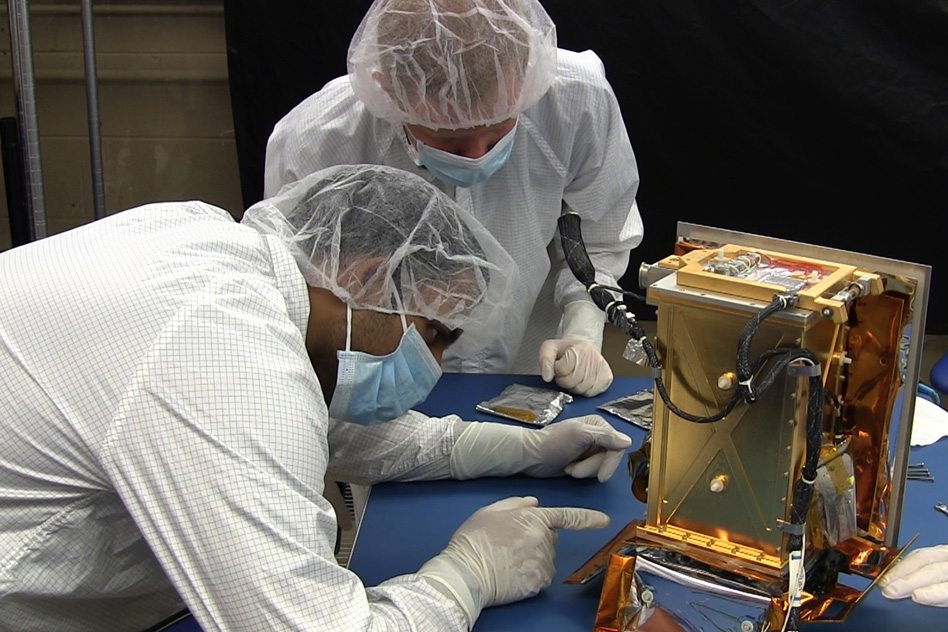 Who can say they’ve been to an asteroid and back? In 2023, more than 50 MIT students may claim this feat, at least through the activities of a small, shoebox-sized instrument named REXIS (Regolith X-ray Imaging Spectrometer).

The instrument, which was designed and built by students from MIT and Harvard University, will be one of five instruments flying aboard NASA’s OSIRIS-REx (Origins, Spectral Interpretation, Resource Identification, Security-Regolith Explorer), the first U.S. mission to retrieve and return an asteroid sample to Earth. This week, NASA announced that REXIS was successfully integrated onboard the spacecraft, bringing the mission one step closer to its scheduled launch next September.

Once in orbit, OSIRIS-REx will set course for Bennu, a small, near-Earth asteroid that may harbor material from the early solar system. The spacecraft is expected to reach Bennu sometime in 2018, when it will survey the space rock for the next year and take a small, 60-gram sample of surface soil before heading back to Earth by 2023. During the spacecraft’s survey phase, REXIS will observe the interaction of solar X-rays with the asteroid’s soil, or regolith, to determine the types of elements present on Bennu’s surface.

MIT News spoke with REXIS team members Mark Chodas, a graduate student in the Department of Aeronautics and Astronautics (AeroAstro), and Rebecca Masterson, instrument manager, co-principal investigator, and AeroAstro research engineer, about REXIS’ journey and MIT’s mark on the mission.

Q: Take us through the scenario, once OSIRIS-Rex reaches the asteroid. What will REXIS be doing as the spacecraft explores the asteroid?

CHODAS: REXIS begins operating soon after the launch of the OSIRIS-REx spacecraft. We will conduct a series of checkouts during the cruise to the asteroid to monitor the state of the instrument and make sure that it is functioning properly. In late 2018, OSIRIS-REx will arrive at the asteroid and begin science operations. One of the first things REXIS does is open our protective cover that shields the detectors from radiation damage during cruise. This operation is critical for REXIS, as the cover needs to open in order for us to observe the asteroid. Just after opening the cover, REXIS will observe the Crab nebula, a well-characterized astronomical X-ray source, in order to calibrate our performance. Then we enter our three-week asteroid observation period where we will be observing the asteroid for up to 16 hours every day. During this period, we will collect sufficient data to characterize the asteroid and compare it to meteorite samples that have been collected on Earth. We also hope that our data helps the OSIRIS-REx science team pick a sampling site.

MASTERSON: The opening of the REXIS cover is indeed a critical moment for the instrument. The radiation cover is opened using a custom Frangibolt actuator from TiNi Aerospace. When we arrive at Bennu and are ready to open the cover, the spacecraft sends a command to the instrument to send power to the Frangibolt. As the actuator heats up, its shape-memory alloy expands, putting the bolt under tension to the point of failure. Once the bolt breaks, after about a minute, the cover is free to open. The team will need to wait for telemetry from the instrument to know that the cover has successfully opened. It will be a very different experience from actuating on the ground, where we can see what is happening.

Q: What did it take for you all to get this instrument ready for space?

CHODAS: REXIS is a unique project in MIT’s long history of space exploration. It is only the second interplanetary instrument led by students (the previous being the Student Dust Counter on NASA’s New Horizons spacecraft). Almost all the technical leads on REXIS are graduate students. We’ve been given much more responsibility than is typical for engineers of our age and experience level. Everything from initial design and analysis through assembly and test was led by and performed by students. Of course, we’ve gotten great support and guidance from a number of mentors here on campus from AeroAstro, the Kavli Institute, and the Department of Earth, Atmospheric, and Planetary Sciences, as well as off-campus mentors at MIT Lincoln Lab, Harvard, and NASA Goddard.

Experiencing the NASA spacecraft development process firsthand has been very enlightening. There are elements of that process, like quality assurance and contamination control, that are talked about in classes but typically aren’t a big part of on-campus spaceflight projects. We’ve gotten a chance, through REXIS, to experience what a big-budget spacecraft development process is like, and we’ve actually fed that back into our research a bit.

MASTERSON: REXIS began as part of the AeroAstro capstone design class in Fall 2011/Spring 2012. A team of roughly 12 undergrads, including Mark, was responsible for writing the requirements for the instrument. These requirements greatly shaped the design that followed. During the class, the students experienced two NASA design reviews.  It was a challenge to match the NASA review cycle with the class schedule, but in the end the students (and the instrument) greatly benefited from the exposure to the NASA review team and mentors.

Once the capstone class was complete, the instrument development continued largely through the work of grad students, but there were a number of undergrads involved through the Undergraduate Research Opportunities Program as well.  At this point in time there have been more then 50 students involved with REXIS — all from various departments around MIT as well as various universities.

The effort required to produce a flight-ready instrument for integration on a mission like OSIRIS-REx cannot be understated. The team was extremely dedicated to getting the job done and overcame many obstacles, including a winter with record snowfall and the usual array of technical challenges and mishaps that accompany a project of this complexity during testing.

Q: OSIRIS-REx will be returning a sample of the asteroid to Earth — the first mission of its kind. What are you hoping that sample will tell us?

CHODAS: Bennu, the target of the OSIRIS-REx mission, is a very primitive type of asteroid, meaning that it has not changed significantly since it formed along with the rest of the solar system over 4.5 billion years ago. Getting a sample from Bennu allows scientists to go back in time to the beginning of the solar system and better understand what conditions were like in that time period. A primary interest is to characterize any organic materials that may be present, telling us about how the basic building blocks of life were distributed in the early solar system. Answering that question will allow us to better understand how life arose on Earth. It’s an exciting mission that has given the REXIS student team a unique window into the science and engineering of solar system exploration.