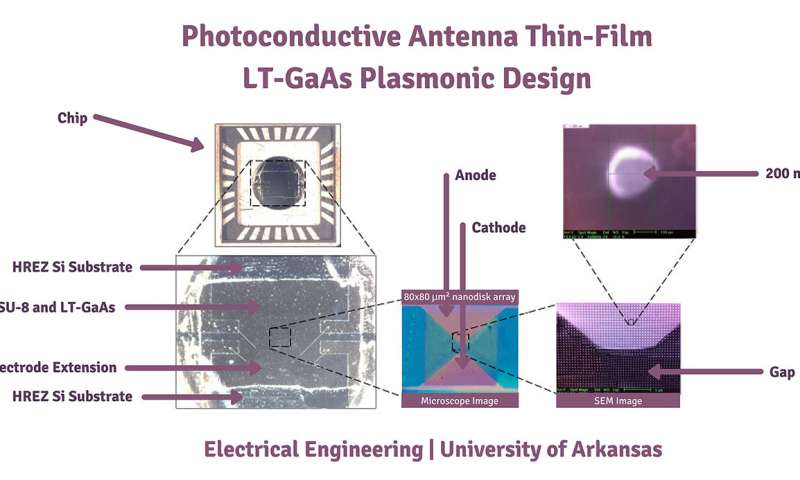 Electrical engineering research into extremely small antennas has made progress that could have a major impact on secure information exchange, giving the U.S. access to a band of frequency no other country can reach.

Electrical engineering professor Magda El-Shenawee’s Terahertz Imaging and Spectroscopy Lab is known for its revolutionary research on the detection of breast cancer tumors using terahertz imaging technology. Now, El-Shenawee has published a paper suggesting terahertz antennas could have their signals strengthened for use in transmitting information.

Her paper, titled “Plasmonic Nanodisk Thin-film Terahertz Photoconductive Antenna,” was presented at the international conference of Antennas and Propagation in Boston in last month. The research was conducted in collaboration with TeraView Ltd., a major manufacturer of terahertz systems in the United Kingdom.

Terahertz antennas are tiny, only a fraction of a millimeter in size. By comparison, the microwave antennas used in cell phones are more than 10 times that size. The newly created terahertz antennas have sent researchers around the world racing to improve its efficiency.

Current antennas on the market provide very low power, a fraction of a milliwatt, which is adequate for some applications, such as breast cancer imaging. However, current power limitations make the antenna inferior for use in potential applications such as radar systems for defense and high-speed wireless communications.

The challenge, El-Shenawee said, is that the strength of a terahertz wave weakens when it travels because of its sensitivity to water, including humidity in the air. For the wave to travel longer distances, the transmitting terahertz antenna needs to radiate electromagnetic waves of higher power at the source.

El-Shenawee’s idea for improving the terahertz antenna’s efficiency involves advancing the antenna material and design. She is collaborating with Hugh Churchill, a material scientist and assistant professor of physics in the J. William Fulbright College of Arts and Sciences, and Miaoqing Huang, an associate professor of computer science in the College of Engineering.

Shenawee’s current terahertz antenna was built using nanodisk arrays on top of a thin film of a semiconductor. In this case, low temperature grown Gallium Arsenide, a typical material for this type of antennas, was used. The antenna is excited by femtosecond laser, with antenna electrodes located below the semiconductor to increase the light trapped in the semiconductor and the photocurrent, and hence the radiated terahertz power.

So far, the achieved power is 3 microwatts, compared to conventional antennas that provide 1 microwatt.

“If we can advance terahertz antennas by advancing their output power, the U.S. will be using a band of frequency that no other country has the technology for yet,” she said.