In light of our coverage on the 2017 International Microwave Symposium, I decided to delve into one of the industry’s basic foundations—the radio frequency (RF) spectrum, and how this communicative platform works. As we all know, the RF spectrum is comprised of radio waves—electromagnetic waves that are generated by an antenna.

Radio waves operate at distinct frequencies and signals that are detected by tuning up a radio receiver. In the United States, the Federal Communications Commission (FCC) determines who has access to these frequencies by issuing licenses to radio stations and other similar outlets.

Aside from AM and FM radio, there are several devices that utilize the RF spectrum. Technologies like navigational devices, televisions, and smart electronics operate on different frequencies in accordance to how long that specific brand of technology has been around. Older communicative technologies like AM radio and navigational devices operate on the lower end of the RF spectrum, which transmits longer waves, while more modern electronics like televisions, satellites, and mobile devices utilize higher frequencies with shorter wavelengths.

The infographics below depict two major components about how the radio spectrum works by defining the number of hertz between both ends, along with the radio wave sizes and what devices utilize certain wavelengths. While explaining how the RF spectrum works can be complicated and confusing, these charts provide a straightforward visual that anyone can use to become familiarized. 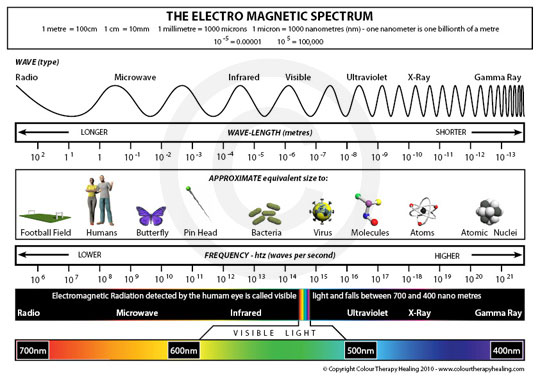