Every year, thousands of people lose their way in forests and mountain areas. In Switzerland alone, emergency centers respond to around 1,000 calls annually from injured and lost hikers. But drones can effectively complement the work of rescue services teams. Because they are inexpensive and can be rapidly deployed in large numbers, they substantially reduce the response time and the risk of injury to missing persons and rescue teams alike.

“While drones flying at high altitudes are already being used commercially, drones cannot yet fly autonomously in complex environments, such as dense forests. In these environments, any little error may result in a crash, and robots need a powerful brain in order to make sense of the complex world around them,” says Prof. Davide Scaramuzza from the University of Zurich.

The drone used by the Swiss researchers observes the environment through a pair of small cameras, similar to those used in smartphones. Instead of relying on sophisticated sensors, their drone uses very powerful artificial-intelligence algorithms to interpret the images to recognize man-made trails. If a trail is visible, the software steers the drone in the corresponding direction. “Interpreting an image taken in a complex environment such as a forest is incredibly difficult for a computer,” says Dr. Alessandro Giusti from the Dalle Molle Institute for Artificial Intelligence. “Sometimes even humans struggle to find the trail!” 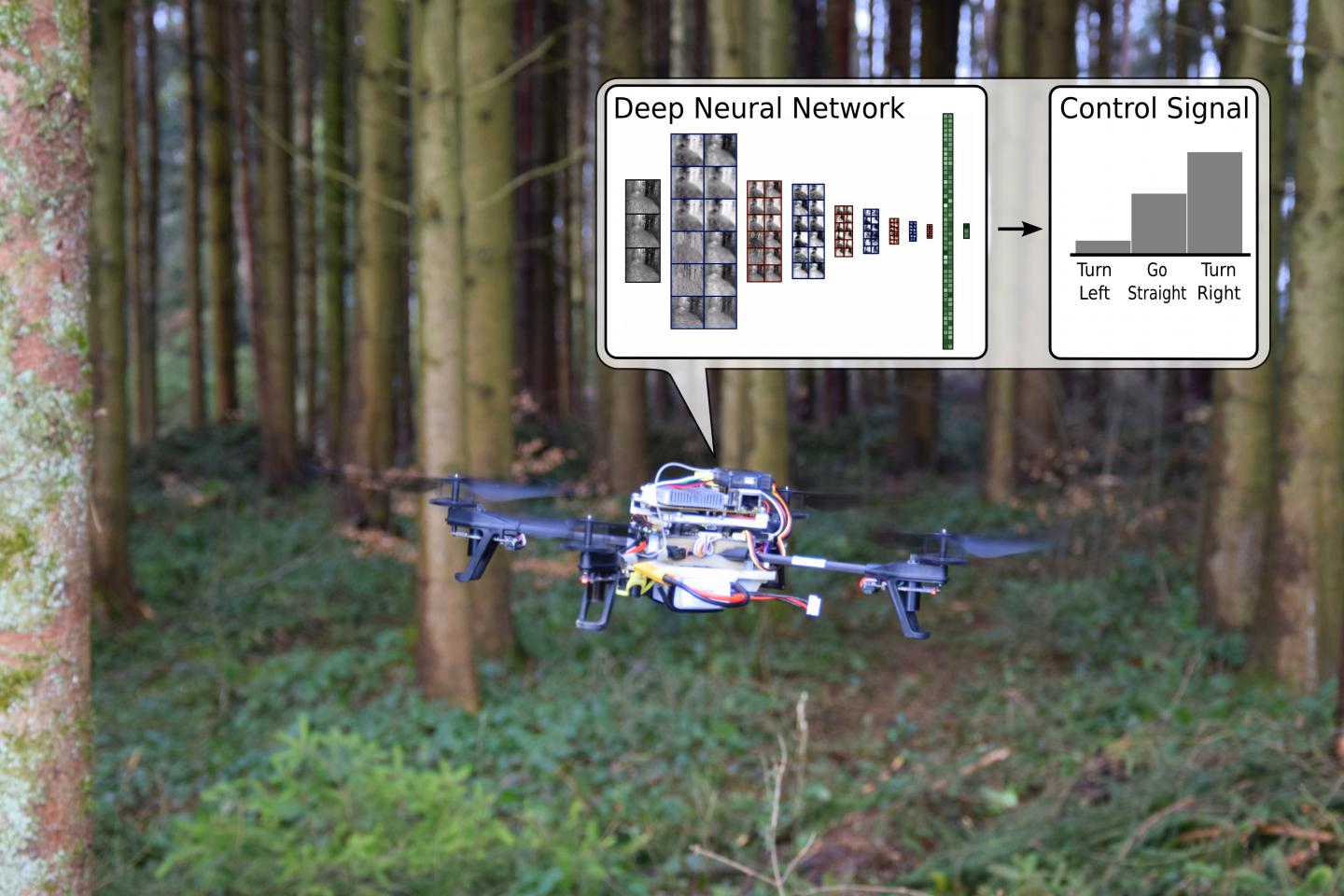 The newly developed software is based on an adaptive network. (Credit: UZH;USI;SUPSI)

The Swiss team solved the problem using a so-called Deep Neural Network, a computer algorithm that learns to solve complex tasks from a set of “training examples,” much like a brain learns from experience. In order to gather enough data to “train” their algorithms, the team hiked several hours along different trails in the Swiss Alps and took more than 20 thousand images of trails using cameras attached to a helmet. The effort paid off: When tested on a new, previously unseen trail, the deep neural network was able to find the correct direction in 85% of cases; in comparison, humans faced with the same task guessed correctly 82% of the time.

Professor Juergen Schmidhuber, Scientific Director at the Dalle Molle Institute for Artificial Intelligence says: “Our lab has been working on deep learning in neural networks since the early 1990s. Today I am happy to find our lab’s methods not only in numerous real-world applications such as speech recognition on smartphones, but also in lightweight robots such as drones. Robotics will see an explosion of applications of deep neural networks in coming years.”

The research team warns that much work is still needed before a fully autonomous fleet will be able to swarm forests in search of missing people. Professor Luca Maria Gambardella, director of the “Dalle Molle Institute for Artificial Intelligence” in Lugano remarks: “Many technological issues must be overcome before the most ambitious applications can become a reality. But small flying robots are incredibly versatile, and the field is advancing at an unseen pace. One day robots will work side by side with human rescuers to make our lives safer.” Prof. Davide Scaramuzza from the University of Zurich adds: “Now that our drones have learned to recognize and follow forest trails, we must teach them to recognize humans.”