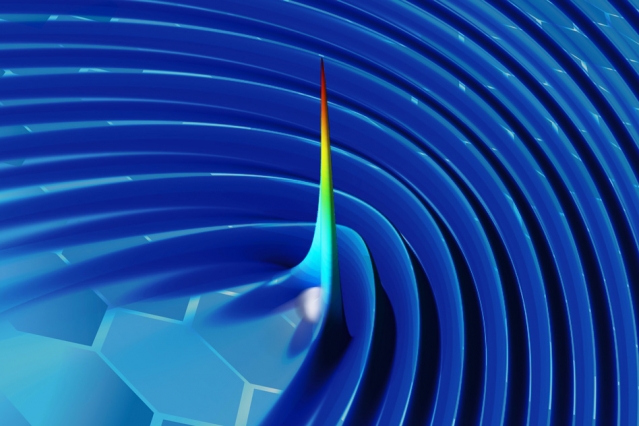 By using plasmons to “wiggle” a free electron in a sheet of graphene, researchers have developed a new method for generating X-rays. In this image of one of their simulations, the color and height represent the intensity of radiation (with blue the lowest intensity and red the highest), at a moment in time just after an electron (grey sphere) moving close to the surface generates a pulse. (Image courtesy of the researchers)

The most widely used technology for producing X-rays – used in everything from medical and dental imaging, to testing for cracks in industrial materials – has remained essentially the same for more than a century. But based on a new analysis by researchers at MIT, that might potentially change in the next few years.

The finding, based on a new theory backed by exact simulations, shows that a sheet of graphene – a two-dimensional form of pure carbon – could be used to generate surface waves called plasmons when the sheet is struck by photons from a laser beam. These plasmons in turn could be triggered to generate a sharp pulse of radiation, tuned to wavelengths anywhere from infrared light to X-rays.

What’s more, the radiation produced by the system would be of a uniform wavelength and tightly aligned, similar to that from a laser beam. The team says this could potentially enable lower-dose X-ray systems in the future, making them safer. The new work is reported this week in the journal Nature Photonics, in a paper by MIT professors Marin Soljačić and John Joannopoulos and postdocs Ido Kaminer, Liang Jie Wong (now at the Singapore Institute of Manufacturing Technology), and Ognjen Ilic.

Soljačić says that there is growing interest in finding new ways of generating sources of light, especially at scales that could be incorporated into microchips or that could reduce the size and cost of the high-intensity beams used for basic scientific and biomedical research. Of all the wavelengths of electromagnetic radiation commonly used for applications, he says, “coherent X-rays are particularly hard to create.” They also have the highest energy. The new system could, in principle, create ultraviolet light sources on a chip and table-top X-ray devices that could produce the sorts of beams that now require huge, multimillion-dollar particle accelerators.

To make focused, high-power X-ray beams, “the usual approach is to create high-energy charged particles [using an accelerator] and ‘wiggle’ them,” says Kaminer. “The oscillations will produce X-rays. But that approach is very expensive,” and the few facilities available nationwide that can produce such beams are highly oversubscribed. “The dream of the community is to make them small and inexpensive,” he says.

Most sources of X-rays rely on extremely high-energy electrons, which are hard to produce. But the new method gets around that, using the tightly-confined power of the wave-like plasmons that are produced when a specially patterned sheet of graphene gets hit by photons from a laser beam. These plasmons can then release their energy in a tight beam of X-rays when triggered by a pulse from a conventional electron gun similar to those found in electron microscopes.

In addition, the system would be unique in its tunability, able to deliver beams of single-wavelength light all the way from infrared, through visible light and ultraviolet, on into X-rays. And there are three different inputs that can be used to control the tuning of the output, Kaminer explains – the frequency of the laser beam to initiate the plasmons, the energy of the triggering electron beam, and the “doping” of the graphene sheet.

Such beams could have applications in crystallography, the team says, which is used in many scientific fields to determine the precise atomic structure of molecules. Because of its tight, narrow beam, the system might also allow more precise pinpointing of medical and dental X-rays, thus potentially reducing the radiation dose received by a patient, they say.

So far, the work is theoretical, based on precise simulations, but the group’s simulations in the past have tended to match quite well with experimental results, Soljačić says. “We have the ability in our field to model these phenomena very exactly.”

They are now in the process of building a device to test the system in the lab, starting initially with producing ultraviolet sources and working up to the higher-energy X-rays. “We hope to have solid confirmation of the principles within a year, and X-rays, if that goes well, optimistically within three years,” Soljačić says.

But as with any drastically new technology, he acknowledges, the devil is in the details, and unexpected issues could crop up. So his estimate of when a practical X-ray device could emerge from this, he says with a smile, is “from three years, to never.”

Hrvoje Buljan, a professor of physics at the University of Zagreb in Croatia, who was not involved in this study, says the work provides “a significant new approach to produce X-ray radiation.” He adds, “The experimental implementation still needs to be performed. Based on the proposal, all of the ingredients for the proof of principle experiments are there, and such experiments will be feasible.”