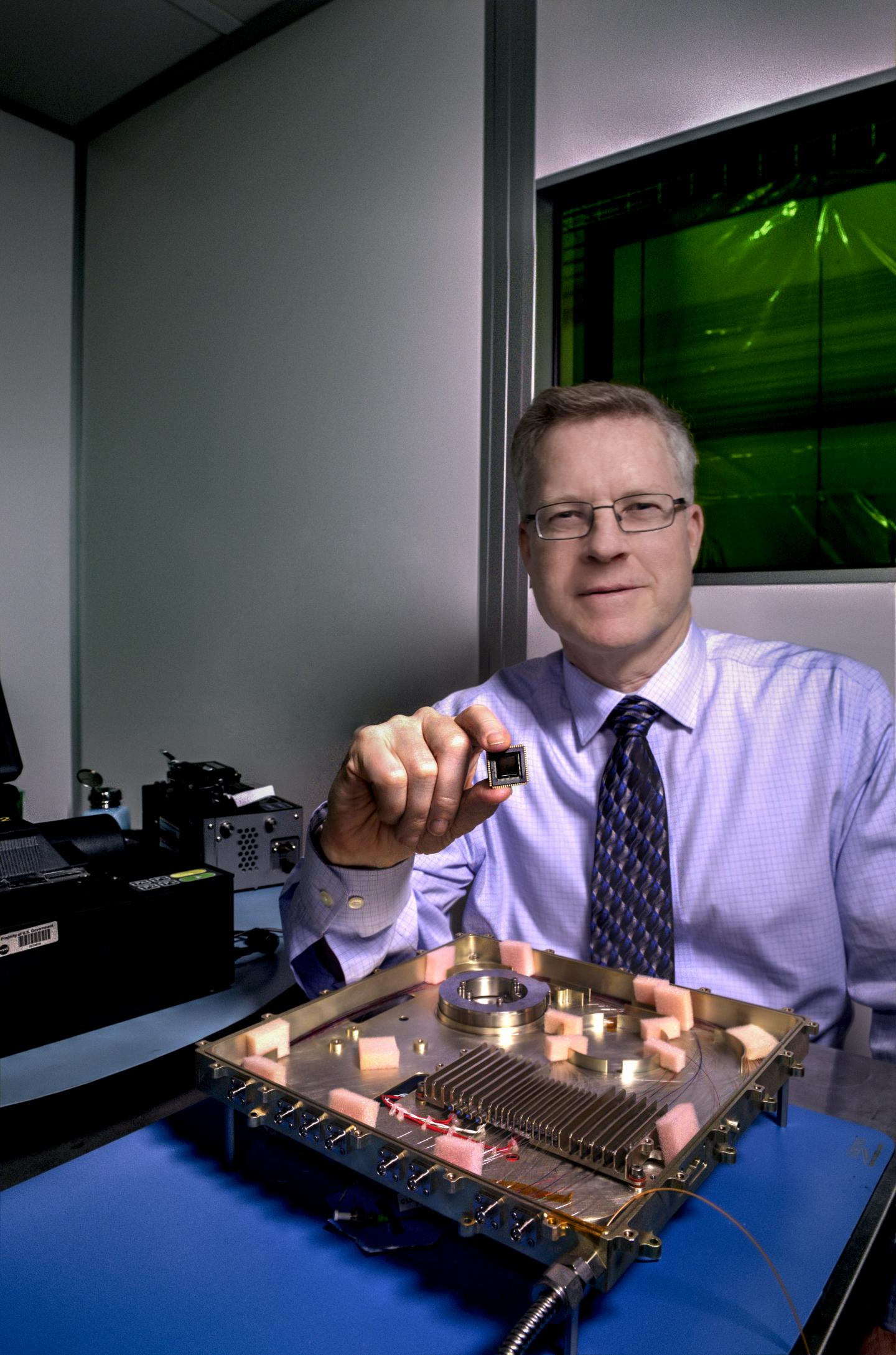 NASA laser expert Mike Krainak and his team plan to replace portions of this fiber-optic receiver with an integrated-photonic circuit, whose size will be similar to the chip he is holding. The team then plans to test the advanced modem on the International Space Station. (Credits: NASA/W. Hrybyk)

A NASA team has been tapped to build a new type of communications modem that will employ an emerging, potentially revolutionary technology that could transform everything from telecommunications, medical imaging, advanced manufacturing to national defense.

The space agency’s first-ever integrated-photonics modem will be tested aboard the International Space Station beginning in 2020 as part of NASA’s multi-year Laser Communications Relay Demonstration, or LCRD. The cell phone-sized device incorporates optics-based functions, such as lasers, switches, and wires, onto a microchip — much like an integrated circuit found in all electronics hardware.

Once aboard the space station, the so-called Integrated LCRD LEO (Low-Earth Orbit) User Modem and Amplifier (ILLUMA) will serve as a low-Earth orbit terminal for NASA’s LCRD, demonstrating yet another capability for high-speed, laser-based communications.

Since its inception in 1958, NASA has relied exclusively on radio frequency (RF)-based communications. Today, with missions demanding higher data rates than ever before, the need for LCRD has become more critical, said Don Cornwell, director of NASA’s Advanced Communication and Navigation Division within the space Communications and Navigation Program, which is funding the modem’s development.

LCRD promises to transform the way NASA sends and receives data, video and other information. It will use lasers to encode and transmit data at rates 10 to 100 times faster than today’s communications equipment, requiring significantly less mass and power. Such a leap in technology could deliver video and high-resolution measurements from spacecraft over planets across the solar system — permitting researchers to make detailed studies of conditions on other worlds, much as scientists today track hurricanes and other climate and environmental changes here on Earth.

The project, which is expected to begin operations in 2019, isn’t NASA’s first foray into laser communications. A payload aboard the Lunar Atmosphere and Dust Environment Explorer (LADEE) demonstrated record-breaking download and upload speeds to and from lunar orbit at 622 megabits per second (Mbps) and 20 Mbps, respectively, in 2013.

LCRD, however, is designed to be an operational system after an initial two-year demonstration period. It involves a hosted payload and two specially equipped ground stations. The mission will dedicate the first two years to demonstrating a fully operational system, from geosynchronous orbit to ground stations. Once NASA demonstrates that capability, it plans to use ILLUMA to test communications between geosynchronous and low-Earth-orbit spacecraft, Cornwell said.

ILLUMA incorporates an emerging technology — integrated photonics — that is expected to transform any technology that employs light. This includes everything from Internet communications over fiber optic cable to spectrometers, chemical detectors, and surveillance systems, to name just a few.

“Integrated photonics are like an integrated circuit, except they use light rather than electrons to perform a wide variety of optical functions,” Cornwell said. Recent developments in nanostructures, meta-materials, and silicon technologies have expanded the range of applications for these highly integrated optical chips. Furthermore, they could be lithographically printed in mass — just like electronic circuitry today — further driving down the costs of photonic devices.

“This technology will enable all types of NASA missions, not just optical communications on LCRD,” Cornwell added.

“We’ve pushed this for a long time,” said Mike Krainak, who is leading the modem’s development at NASA’s Goddard Space Flight Center in Greenbelt, Maryland. “The technology will simplify optical system design. It will reduce the size and power consumption of optical devices, and improve reliability, all while enabling new functions from a lower-cost system. It is clear that our strategy to leverage integrated photonic circuitry will lead to a revolution in Earth and planetary-space communications as well as in science instruments.”

Under the NASA project, Krainak and his team will reduce the size of the terminal, now about the size of two toaster ovens — a challenge made easier because all light-related functions will be squeezed onto a microchip. Although the modem is expected to use some optic fiber, ILLUMA is the first step in building and demonstrating an integrated photonics circuit that ultimately will embed these functions onto a chip, he said.

ILLUMA will flight-qualify the technology, as well as demonstrate a key capability for future spacecraft. In addition to communicating to ground stations, future satellites will require the ability to communicate with one another, he said.

“What we want to do is provide a faster exchange of data to the scientific community. Modems have to be inexpensive. They have to be small. We also have to keep their weight down,” Krainak said. The goal is to develop and demonstrate the technology and then make it available to industry and other government agencies, creating an economy of scale that will further drive down costs. “This is the pay off,” he said.

Although integrated photonics promises to revolutionize space-based science and inter-planetary communications, its impact on terrestrial uses also is equally profound, Krainak added. One such use is with data centers. These costly, very large facilities house servers that are connected by fiber optic cable to store, manage and distribute data.

Integrated photonics promises to dramatically reduce the need for and size of these behemoths — particularly since the optic hardware needed to operate these facilities will be printed onto a chip, much like electronic circuitry today. In addition to driving down costs, the technology promises faster computing power.

“Google, Facebook, they’re all starting to look at this technology,” Krainak said. “As integrated photonics progresses to be more cost effective than fiber optics, it will be used,” Krainak said. “Everything is headed this way.”