Through evolutionary refinements, a flock of birds can seamlessly fly together as if they exist as one large organism, and researchers at South Dakota School of Mines & Technology (SD Mines) have taken note. The research team is interested in transitioning these natural skills into robotics swarms, replacing years of evolution with mathematical models.

“These decision-making problems are very challenging, because each independent robot in the swarm has to predict how others will behave in the future and then make its own decisions accordingly,” says Shankarachary Ragi, Ph.D., who leads the research effort, and is the assistant professor in the Department of Electrical and Computer Engineering at SD Mines.

Swarm tactics pool the cooperative efforts of each individual to create one prevailing entity. In the past, a centralized computer commanded the entire swarm, but researchers are aiming toward a decentralized decision-making process and real-time error recovery.

“Even if the swarm makes a mistake, something goes wrong, the swarm needs to learn from this mistake, by immediately reacting and then evolving,” explains Ragi. “Basically, we are developing robust algorithms to account for sudden, unexpected changes.”

With each drone armed with optical, thermal, and additional on-board sensors, they can individually identify objects. Thus, each drone holds one piece of the puzzle, that, when put together, reveals the larger picture at play.

Ragi and his fellow researchers are looking to enable this behavior by developing algorithms for complex problem solving.

If all goes as planned, the benefits of autonomous flying swarms extend over a wide range of use-cases.

“Imagine a new form of organic precision agriculture where swarms of drones are programmed to recognize and remove weeds from a field while leaving the crops intact. Or, drones with special sensors detecting one part of the field that is nutrient deficient, deploying fertilizer in exactly the right place with the amount needed,” the researchers theorize.

Other applications include bridge and large-scale structural inspection, public safety needs such as taking down unwanted private drone activity, and military campaigns.

Below you can view the hummingbird-sized drones Ragi and his team are working with to develop next-gen swarm technology. 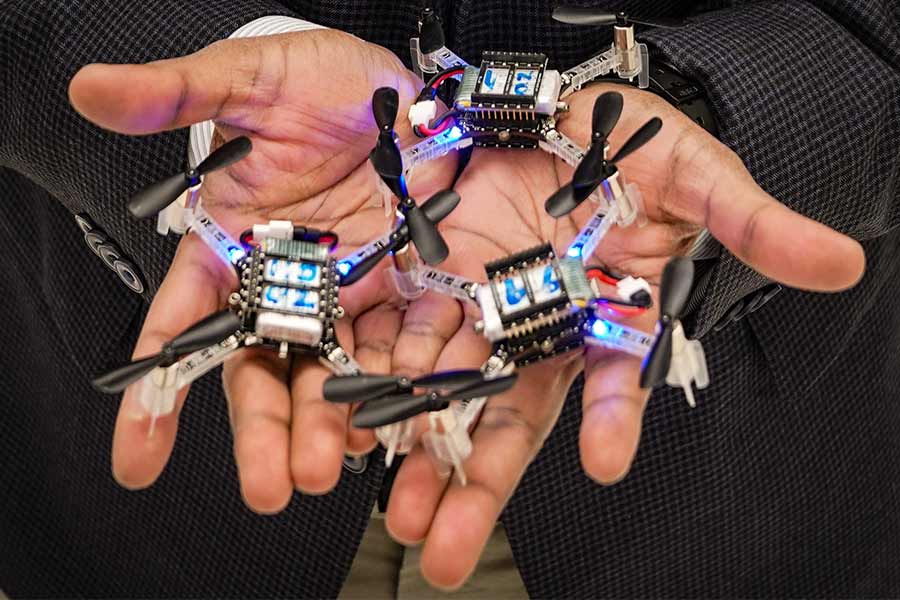