The Internet of Things (IoT) will affect all industries and ultimately everyone’s daily life. Expectations for IoT devices and networks with respect to reliability, performance, quality, and long-term availability are extremely high, and wireless connectivity is a critical success factor for IoT devices. IoT applications requiring global coverage and mobility will focus on cellular technologies, such as narrow band-IoT (NB-IoT) technologies. Testing of the communication behavior of NB-IoT devices is important in all phases of the product lifecycle in order to ensure proper functionality, optimize performance, and increase battery life.

NB-IoT: The Need for Scanner-Based Testing

NB-IoT, also known as Cat NB1, is a standard for connecting devices to the internet through the cellular network. This is a standard focused on machine-to-machine communications. The range of applications are vast, with key applications including asset tracking, intrusion detection, utility meter reporting, smart parking areas, and home health care monitoring. This class of communications devices generally has low data volume, are not highly mobile, and not latency sensitive. However, they can be mission critical applications such as in-home health care or utility metering. Most importantly, NB-IoT devices will likely be deployed in very large numbers.

NB-IoT is focused on optimizing the cellular link to massive numbers of fixed location devices which generate infrequent, short communications. The technology is optimized for long device battery life and good in-building coverage.

NB-IoT is a narrow band Orthogonal Frequency Division Multiplexing (OFDM) signal compatible with current versions of LTE. While different enough to require its own standard, many of the terms, modulations, and signals are similar to those of LTE, though simplified.

NB-IoT has a 180 kHz wide carrier (one LTE Physical Resource Block), which contains 12 OFDM sub carriers and is preferably deployed in the 700, 800, or 900 MHz bands to assist with signal penetration in-building.

In-band operation uses one physical resource block in an existing LTE carrier. This does not require any additional (expensive) frequency bands, and can likely be implemented with only a software upgrade to the eNodeB. Guard band operation is also unlikely to require new RF spectrum, and allows the NB-IoT carrier to be broadcast in the already allocated LTE guard band. Stand-alone operation works nicely if refarmed GSM spectrum is available, since NB-IoT carriers fit nicely into a GSM channel plan. That varies by country, city, and carrier, but the flexibility is there.

NB-IoT applications require a highly reliable signal with low data rates that can be implemented using existing LTE network hardware. Although this seems simple, there are some key causes for concern. The NB-IoT concept is meant to enable the rapid deployment of a large number of low cost, battery powered devices without concern for RF propagation conditions. Locations in basements, utility cabinets, and water meter enclosures are all considered usable. Expectations are that the battery life will approach 10 years. In short, NB-IoT supports a high volume of mission critical applications with poor signal propagation conditions for a long period of time. What could go wrong?

Industry experts are using an ultimate installation volume number of 40 devices per household for their planning (Ericsson, 2016). If we take a city, such as San Jose, Calif., with 300,000 households, that works out to about 12 million devices when complete to its full potential. This is for one city. That’s not a rollout you want a high fault rate for, particularly since some of the more critical installations will require skilled labor with the (expensive) associated truck rolls. The IoT projected growth graph shows the current take-rate, with future projections.

The extended link budget margins of NB-IoT will help a lot in deep-building applications. The path loss budget is specified at 164 dB, which is 22 dB more than LTE. Also, the NB-IoT signal is typically power boosted from 6 to 12 dB over the LTE carrier signal. This is the good news. The bad news is that this margin is intended to help with reaching locations deep inside buildings, and/or locations inside utility cabinets which may also be inside buildings. Then there is the issue of the effect of new energy efficiency standards for buildings. The British Regulator, Ofcom, did some research and testing on building entry loss for construction that meets new energy efficiency standards (Ofcom, 2014). Their conclusion is that the exterior walls plus metalized glass and/or foil-shielded insulation can cause a 6 to 10 dB loss at right angles to a wall or thermally insulated window. As the angle of incidence goes up, the loss can increase to as much as 20 to 30 dB depending on the carrier frequency. That can eat up a 22 dB path loss margin quickly. Then there is the loss from internal walls, floors, and other architectural barriers to consider. An accurate propagation model of buildings in your coverage area will be quite helpful.

As we all know, the cellular spectrum is expensive, and as a result, crowded. Existing spectrum may need to be cleared, guard bands may be necessary, and in-fill LTE eNodeB’s may have been used for additional throughput (Densification) making adding a new service far from simple. Interactions between existing cellular services and NB-IoT will quite likely result in the need for a new network optimization effort.

The simplest test plan is to not test at all. Just install a $10 IoT device, assume it will find a network and move on. And in fact, many NB-IoT devices will be installed in exactly that manner, by consumers and non-RF savvy people. It is when the (many) devices do not work that the problems will start. Given the anticipated installation volume, deep-building locations, potential effects on existing services, and mission critical tasks, hoping that NB-IoT devices will function properly is not enough.

When rolling out NB-IoT services in stand-alone or guard-band mode, it’s quite important to ensure that the anticipated downlink and uplink frequencies are clear over the service area. Spectrum measurements, both in spectrum and spectrogram mode, can be invaluable in this task. With the addition of limit testing, trouble spots can be automatically flagged. Issues can be from either adjacent channel bleed over or from actually having a rogue carrier on the anticipated channel.

A more pervasive issue is in-band interference. Receivers can be de-sensitized by any RF signal that reaches their first mixer. Since the low cost NB-IoT receivers are not likely to have a pre-filter, a generally high noise floor on the downlink band can cause a loss of sensitivity of the NB-IoT device receiver. That can be a real issue when the device is in a location with high path loss.

Outdoor scanner based coverage testing is focused on signal strength and signal quality from the serving cell and the adjacent cells (Top N cells) versus location. The big new concern with NB-IoT is the in-building walk testing, in particular, the deep-building locations that NB-IoT is intended to serve. Devices in basements, metal equipment cabinets, and in other awkward locations are all meant to work. There are quite a few NB-IoT scanner based coverage measurements, and each one has a specific purpose. They are measured per-serving-cell and each measurement set is geo-referenced. They focus on the sync signals (power, RSSI, and signal quality) and the full bandwidth measurements (power, RSSI, and signal quality). These measurements can be used for propagation model calibration both indoors and outdoors, coverage validation, and for identifying areas of pollution or interference from other cellular technologies or faulty RF equipment. In addition to the physical layer measurements, a scanner can demodulate the NB-IoT signal to display the level 3 setup information, specifically the information in the MIB (Master Information Block) and the SIB1 (System Information Block 1). This provides a wide variety of network configuration information that can help diagnose network setup issues.

The cellular spectrum is crowded, and adding a new service to the existing services will affect both services. To find out how much and where these services are affected is the task of the scanner.

NB-IoT is often implemented inside an LTE band. This may be implemented with nothing more than an eNodeB firmware upgrade, making it quite attractive from a financial standpoint. As shown in the figure, NB-IoT’s signal-to-interference plus noise ratio (SINR) can be affected by the LTE host signal, and also, the other way around. More importantly, if densification has been implemented, nearby cells may not be set up to avoid the NB-IoT carriers, and so degrade both signals. 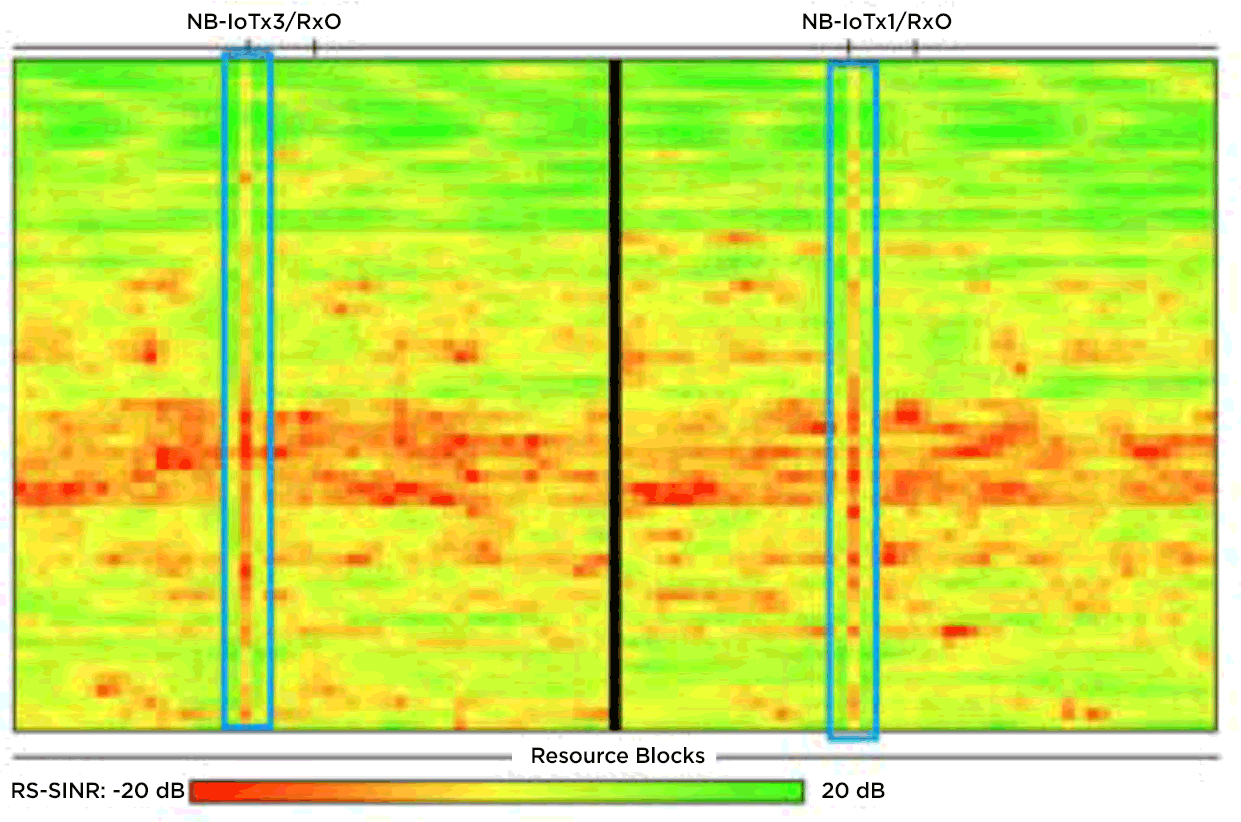 The NB-IoT signal is normally power boosted compared to the LTE signal, to enable better coverage in difficult areas indoors. The power boost can be seen in the RF power scan (spectrum view) and measured in the LTE and NB-IoT Top N scans. This is an effective check on the eNodeB configuration and a clue when troubleshooting interactions between the two transmission setups.

There is a similar interaction between stand-alone NB-IoT, implemented into former GSM frequencies and any existing GSM carriers. In this case, the issue is adjacent channel power, either from the GSM signal interfering with the NB-IoT signal, or the NB-IoT signal interfering with the GSM signal. This can be spotted by the scanner when it is set up to scan GSM and NB-IoT in parallel. A typical scenario is when a geographic area with NB-IoT is adjacent to an area without NB-IoT. The high power levels typical of GSM lead to significant overlap, and that can result in lower CINR or SINR measurements in these boundary areas, particularly in the higher levels of high-rise buildings, where the strong GSM carriers have less path loss.

When there is a quality of service (QoS) or network key performance indicator (KPI) issue, a scanner is a good first tool to assess the complete RF environment using the capabilities discussed earlier. Pass/Fail thresholds allow automatic identification of trouble spot locations. In this case, they are identified by colored pins on an area map. This sort of graphical, location based, analysis greatly speeds up the hunt for issues by giving you a both a physical location and a good analysis of exactly the issue that you are facing. With these clues, resolving the problem will become much easier than without these clues.

Scanner measurements are passive, not active. They don’t require an active network subscription, so they are not limited to a specific band or network. This makes it possible to measure signal parameters for multiple networks during one drive, or perhaps, one walk. Knowing how your signal compares to that of other network operators can assist greatly in network optimization, and help resolve configuration, pollution, interference, and many other issues.

NB-IoT has a wide range of applications for agriculture, health care, security, safety, automotive, logistics, smart cities, and utilities. However, key concerns are installation volume, deep-building installations with the associated path loss, and the effects on existing services in the crowded RF spectrum. Given the projected installation volume and mission critical applications, it is important to plan properly both for rollouts and for the necessary network optimization and troubleshooting. NB-IoT scanner measurements provide a way to see what is happening in coverage areas, both in your spectrum and nearby. Scanners allow you to analyze coverage and co-existence issues, as well as troubleshoot problems and benchmark both your signals and other provider’s signals. If you can’t see the problem, you can’t fix the problem, and a scanner is the fundamental window on what is happening in your spectrum.