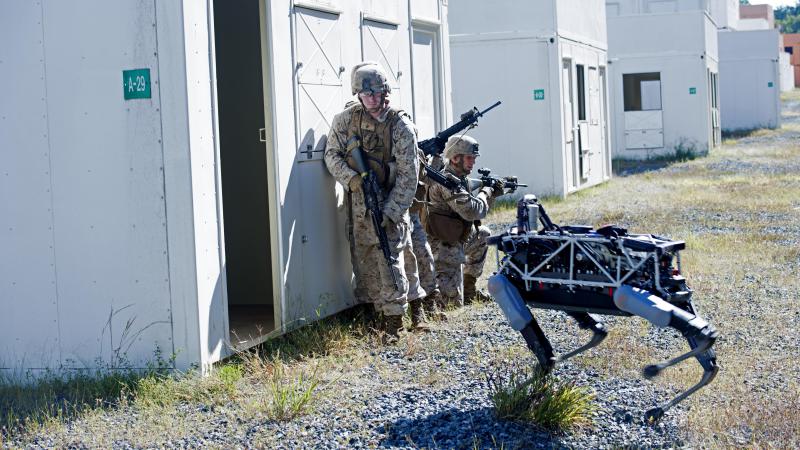 “We want to continue to experiment with quadruped technology and find ways that this can be employed to enhance the Marine Corps warfighting capabilties,” said Capt. James Pineiro, the branch head for Marine Corps Warfighting Lab.

All week the Marines with the lab and employees of DARPA tested Spot’s abilities on different terrains including hills, woodlands and even in urban terrain.

“I think a robot like Spot has tons of opportunities [Marines] could use it for, like scouting or load carriage,” said Ben Swilling, a roboticist with Defense Advanced Research Agency.

During a military operation in urban terrain drill, Spot went into the building before the Marines simulating peaking around corners and looking for enemies and possible threats.

“The Marines have been very receptive to the new technology, embrace it and come up with new ideas we couldn’t even dream up,” said Pineiro.

An operator uses a radio link from a laptop computer and a video game controller to operate Spot from as far as 500 meters. “It’s actually very easy to operate the robots,” said Swilling. “We have had people as young as four run the robot around.”

Spot isn’t the first of its kind. It has a few predecessors such as the much larger and heavier LS3 and “BigDog.” Spot is leaner, quieter and much more agile making it more efficient.

“Spot is great and has exceeded the metrics that we’ve provided,” said Pineiro. “We see it as a great potential for the future dismounted infantry.”

While Spot is not intended to be operational, the Marine Corps Warfighting Lab is evaluating the uses of other robotics in the future.

“We continue to invest in research and development of robotics and autonomy to find ways to reduce threat to Marines and enhance our capability at the same time,” said Pineiro.

Further evaluation and development of robotics in the Marine Corps could help save lives and lighten the load for Marines in the future.

“Robots can’t get shot and they can’t die,” said Swilling. “If you need to send someone into danger’s way, you don’t want anyone to get hurt.”